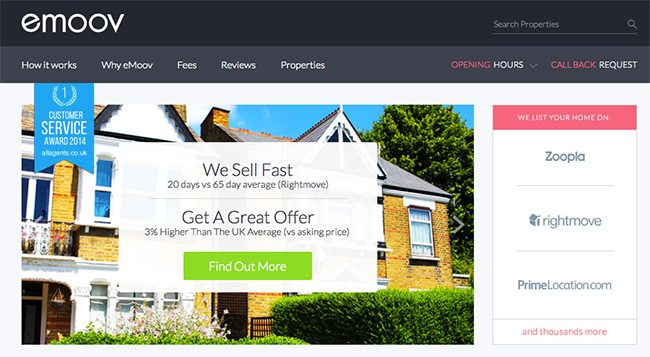 Home sellers fear they will be left hundreds of pounds out-of-pocket after online estate agency Emoov went into administration today.

Talks with potential buyers collapsed over the weekend, chief executive Russell Quirk said in an email sent to staff this afternoon, published by trade magazine Estate Agent Today, adding prospective purchasers did not come through with ‘viable offers’ to acquire the business.

Sellers who signed up with eMoov paid the firm a flat £895 fee – many upfront – and there are now concerns that they will lose their money.Online estate agent has called in administrators after not posting a profit for nine years

‘They say that entrepreneurs should never give up,’ said the email from Quirk to staff.

‘But at the same time one needs to know when efforts have been truly exhausted and when you simply have to call it a day.’

He went on to add: ‘Regretfully and despite my significant endeavours over this weekend to achieve such, the prospective purchasers that have been in the wings have not come through with viable offers to acquire the Emoov business.’

The email says that at 1pm today, Quirk held a call with Emoov board members where it was agreed to appoint James Cowper Kreston’s Peter Whalley and Tom Russell as administrators.

Once this is filed with the court later today, James Cowper Kreston will take charge of the affairs of the company and its staff, customers and creditors and will work to secure an ultimate buyer, the email says.

TV property star Sarah Beeny started up her own online estate agent Tepilo, which merged with eMoov earlier this year

Despite the pending administration, the website is still up and running, and accepting valuation requests for potential sellers.

The company offered packages starting from £895, with no cash upfront.

According to job website Glassdoor, the company employs more than 50 staff.

‘Thank you. I’m so sincerely sorry that it has come to this,’ the email said.

Sources told Sky that a pre-pack administration, through which a buyer acquires some of a company’s assets while leaving its liabilities behind, was soon to be announced.

What went wrong for Emoov?

The group had been loss-making since it was founded in 2009, and had expected to post a profit by 2020.

In May this year Emoov announced a £100million merger with Urban.co.uk and Tepilo, founded by television presenter Sarah Beeny, in a bid to create a rival to leading online estate agent Purplebricks.

Founder Quirk went on to say in an interview that the business could be capitalised as £500million to £700million in the next two years.

In June the digital estate agent made an audacious bid for Countrywide, which wasn’t accepted.

Quirk was recorded last month saying he had been ‘let down by some of [Emoov’s] large shareholders.’

‘We are in talks with parties that have approached us with a view to acquiring the business,’ Quirk says in the video.

‘We did the merger deal with Tepilo about five months ago. That deal was constructed around a certain amount of money coming in.

‘[Tepilo shareholders] pledged to provide a certain amount of money to the business. Let’s just say that on the Tepilo side, that money has not been forthcoming.’

According to Companies House, Quirk set up a new company in September, ‘Russell Quirk Ltd’, which is described as being a real estate agency and public relations firm.

A week later he set up public relations firm ‘Properganda.’

Russell Quirk could not be immediately contacted for comment.