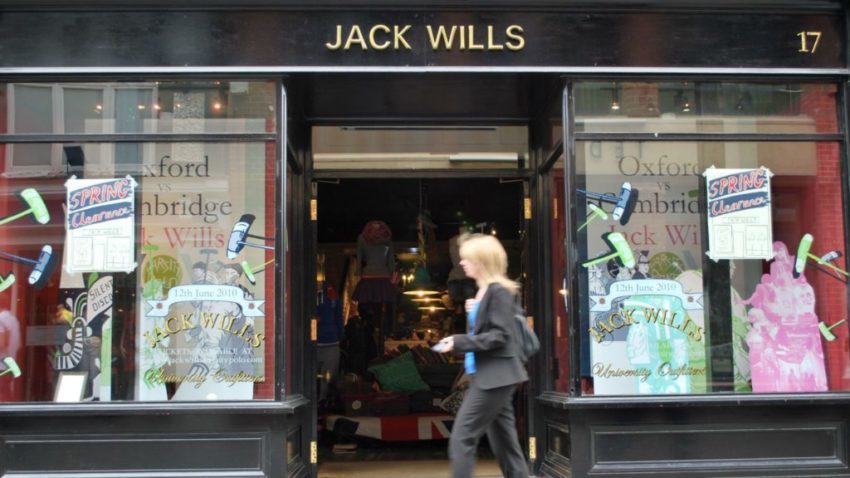 Sports Direct has shut down eight Jack Wills shops and warned that it will close more if landlords do not agree to further rent cuts, only two weeks after the retailer bought the preppy fashion brand in a pre-pack administration.

The stores that have been closed are in Marlborough, Wiltshire; Rock, Cornwall; St Albans, Hertfordshire; Tunbridge Wells, Kent; Derby; Reigate, Surrey; Durham and Kingston upon Thames.

Michael Murray, Sports Direct’s head of elevation and the future son-in-law of the retailer’s founder Mike Ashley, told The Times that the closures were “not a question of the right number of stores, but what’s the right rent”.

It is understood that Jack Wills is demanding that landlords charge zero rent in areas where the business rates bill is high.

It is not the first time that Mr Ashley has gone to war with landlords, after blaming “greedy” property firms for the closures of House of Fraser stores.

Mr Murray, 29, said: “I don’t think we’ll end up with 100 stores but I’ll try and save as many as I can, but it’s a negotiation with the landlords as you can’t negotiate with the rating authority.”

Mr Murray has claimed that Jack Wills ran into difficulty when it “became overly focused on running the operations of 100 stores and not ensuring the brand remained relevant”.

He added: “They got lost as they were focused on saving money because they overextended themselves.”

Mr Murray said that Sports Direct would continue to buy more brands, despite the dizzying pace of its acquisition of struggling high street chains, but the company would dedicate separate resources and management to them, rather than risk them going the way of Firetrap, Dunlop or Slazenger, past acquisitions.

Sports Direct bought Jack Wills, the casual wear retailer that is known for its hoodies and logo-emblazoned tracksuit bottoms, in a £12.8 million pre-pack deal this month.

Jack Wills was founded in 1999 by Peter Williams and sold to Bluegem, a private equity firm, in 2016.

Mr Williams was fired last year after a falling out between him and Bluegem over stock control issues. Mr Williams continues to be a landlord to two of Jack Wills’s stores.