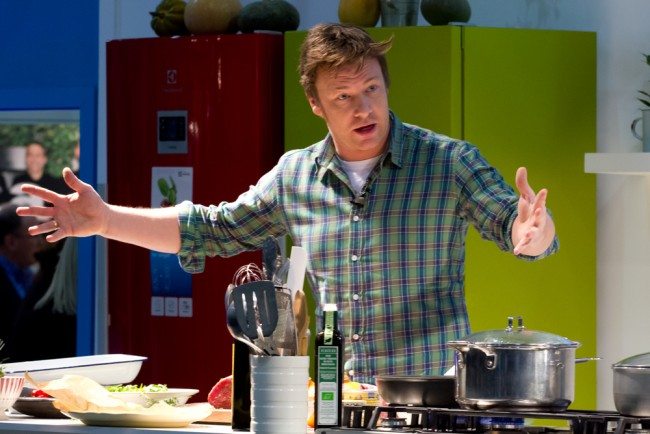 Jamie Oliver has blamed Brexit for the collapse of his restaurant chain that he thought he was ‘big and clever enough’ to fix.

The TV chef believes people stopped eating at restaurants because of uncertainty when Brexit was announced after the 2016 referendum.

He said: ‘The world changed, the high street changed – it started to become Uber-fied – our competitors changed, and we looked less different to them as we did in the beginning.

‘Then, when there’s that chain reaction, throw a bit of Brexit in, say the B word, confidence goes and people’s habits changed.’

In BBC Radio 4’s new two-part programme Jamie Oliver: A Life Through Food – which comes just three months after the majority of his restaurants were closed – he claimed his 40th birthday was ruined by the collapse of his business.

He said: ‘It was always a very separate company, driven and run by a separate team. That didn’t mean my involvement was any less.

‘My 40th birthday was ruined because of the cloud of [thinking], “Oh right, what’s happening here?” and working out what are the consequences and what do we do.

‘I’m fairly sure that I’ve learnt some very valuable lessons that will allow me to do, possibly, some extraordinary things in the next 20 years in a very, very different way, and I don’t know what that is yet.

‘I actually, weirdly, have a sense of gratitude for having seen the extraordinary best of it, and having had to live through the real worst of it – and that’s physically, mentally and financially.

‘But, you know, I nearly got there, but just didn’t quite make it this time.

‘I think it’s a fascinating time – certainly one for me to sit back and not do anything! Learn some stuff, be humbled, try and deal with the mess, and move on.’

Roughly 1,000 jobs were lost when all 25 outlets of Jamie’s Italian, Barbecoa and Fifteen closed.

Oliver put in £13million of his own money to try and tackle the collapse but the company still lost £29million in just one year.