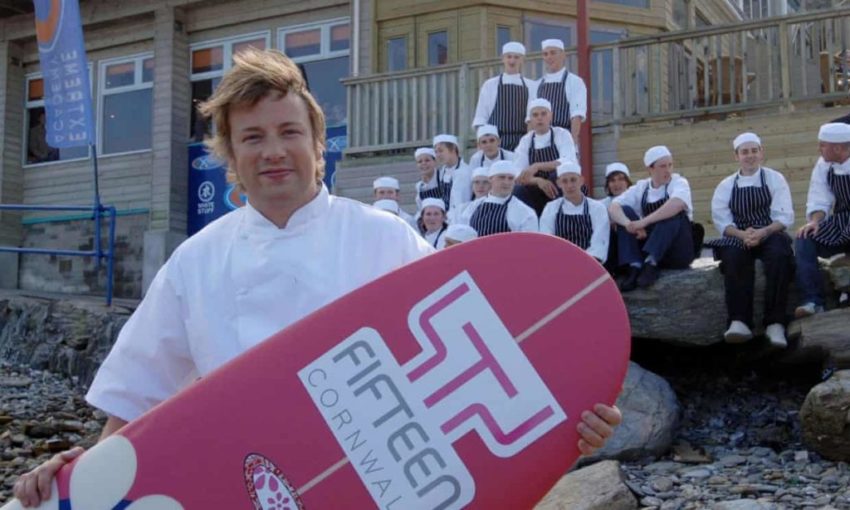 Fifteen Cornwall in Watergate Bay, one of the last outposts of Jamie Oliver’s UK restaurant empire, has closed its doors with the loss of 100 jobs.

Chefs and waiting staff at the restaurant, which uses the celebrity chef’s name under licence but is owned and run by a charitable trust, were told the business would be shutting its doors on Thursday afternoon. About 70 people work at the restaurant and a further 30 work at the Cornwall Food Foundation charity, which will also be wound up.

The closure comes only months after the celebrity chef’s UK restaurant business, including the Jamie’s Italian chain, Fifteen in London and Barbecoa, collapsed in May, making 1,000 staff redundant.

In a statement, Fifteen said: “We are deeply saddened to announce that Fifteen Cornwall will close and cease trading with immediate effect.”

It said the necessary steps towards liquidating both companies had been taken and liquidators would be in touch with all affected parties.

Matthew Thomson, the chief executive of the Cornwall Food Foundation said: “This is an incredibly sad day for everyone and we will try our best to support those who have been impacted. I am profoundly sorry for the hurt, loss and distress this announcement will undoubtedly cause.”

The seaside charitable venue opened by the celebrity chef 13 years ago survived the difficulties of Oliver’s wider business because it is an entirely separate business, with all its profits going back into the charity.

While Oliver’s name is above the door under a licence agreement, the chef no longer has financial involvement and had been spending only occasional days in the kitchen working with apprentices.

The restaurant trained six to 10 young unemployed people a year in its kitchens while serving up largely locally sourced seasonal food.

Jamie Oliver said: “I am very surprised and saddened to learn that Fifteen Cornwall and the Cornwall Food Foundation have closed. Both organisations have always been run separately from us but the team has done an amazing job with the trainee programme, training over 200 chefs and reaching so many more along the way – so this is a huge blow. My thoughts are with everyone affected.”

Since its launch, Fifteen Cornwall said two-thirds of the apprentices it had trained since 2006 were still working in the restaurant trade and many had set up local businesses, making it an important part of the economy in a county where regular work can be hard to find.

The Cornish outpost was inspired by Oliver’s first restaurant, Fifteen in London, which he set up in 2002 and which closed its doors in May alongside the Jamie’s Italian chain.

The restaurant made sales of about £3m last year but only broke even, after making an average profit of more than £200,000 a year for several years.

Fifteen’s closure comes at a difficult time for the industry. A string of restaurants have got into difficulties recently including Byron, Carluccio’s and Patisserie Valerie. The sector has been hit by rising costs, a slowdown in consumer spending and a vast amount of competition after private equity funds ploughed millions of pounds into opening casual dining restaurants.