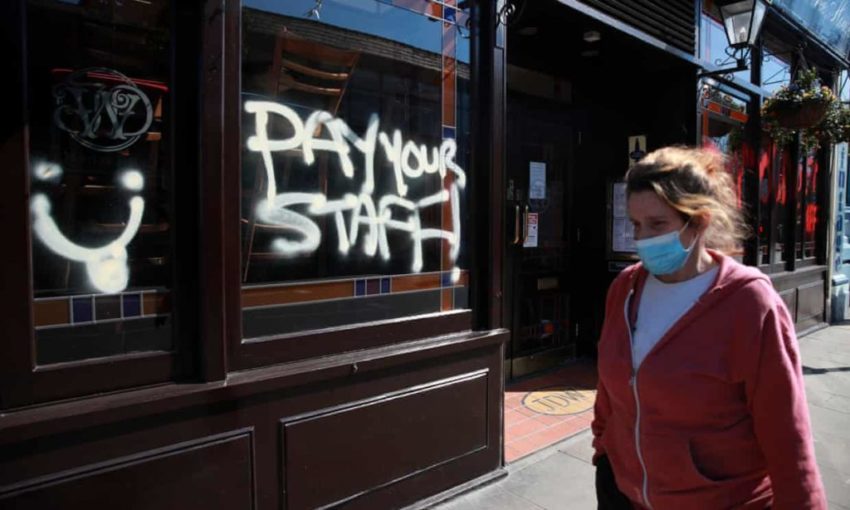 JD Wetherspoon has told its suppliers that it will not pay them until pubs reopen after the coronavirus lockdown.

The company has however reversed its decision to not pay staff promising that they will get their wages beyond Friday provided the government agrees a reimbursement scheme fast enough.

As a backlash grows against its behaviour during the crisis, the pub chain confirmed that it had told firms supplying food, drinks and other services that they would not be paid until its 874 pubs were allowed to reopen.

Tim Martin, the company’s founder and chairman, had already told its 43,000 staff that the company could not afford to pay them after Friday.

The company now says staff will get paid on 3 April, as long as the government backs its interpretation of the reimbursement scheme set out by the chancellor, Rishi Sunak.

The government would also have to deliver on its “furlough” scheme, pledged to businesses struggling to pay wages during the coronavirus lockdown, before the end of April. Under the scheme, the state will reimburse companies for 80% of each staff members’ salary, up to a cap of £2,500 per month.

JD Wetherspoon will top up the wages of employees whose pay exceeds the cap, but it will not offer holiday pay. It also said that while ongoing parental or adoption leave would continue as usual, the position of staff about to go on leave was not clear.

Hours that the company’s staff work for other businesses in the meantime are likely to be deducted from their furlough pay.

JD Wetherspoon has also told its suppliers: “We are asking for a moratorium on payments, until the pubs reopen, at which point we intend to clear outstanding payments, within a short timeframe.”

The email, first published by the sustainability website Footprint, continued: “We understand that this puts significant pressure on our suppliers, but we are kindly asking for your assistance during this very difficult period.”

The law allows suppliers to charge 8% statutory interest on top of the Bank of England base rate on late payments.

Sean Upson, a partner at Stewarts law firm, said the company may seek to use a “force majeure” clause to free itself of contractual obligations.

But he said: “Force majeure is not a ‘get out of jail free’ card. There is no legal precedent for using it in this way.”

A spokesperson for JD Wetherspoon confirmed the letter to suppliers was genuine.