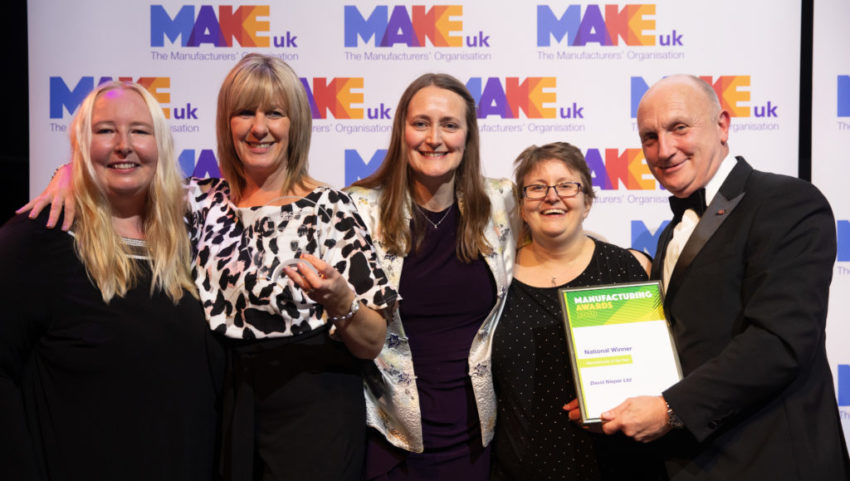 Alfreton based David Nieper Ltd has struck gold at the prestigious finals of a major national manufacturing awards programme organised by Make UK, the manufacturers’ organisation.

The awards which recognise excellence among manufacturing companies in six categories, as well as five Apprentice categories across the UK, were presented at the annual awards ceremony of Make UK which was held at Canary Wharf in London and sponsored by Japanese IT solutions provider Hulft.

David Nieper picked up gold in the Sustainability Award and was also runner up in the national Developing Future Talent category. As a result of its outstanding success the company was also given the evening’s main award, the prestigious Make UK Manufacturer of the Year, beating winning companies in all the five award categories across the UK.

Judges said the company, which has been a designer and manufacturer of high end female fashion for almost 60 years, has shown a consistent and strong commitment towards having a sustainable business model. Christopher Nieper, Managing Director is recognised as an ambassador for sustainable business and sets an example for both David Nieper and the industry.

They added that the breadth of ambition across all three components of sustainability, and the determination shown by setting tough targets and meeting them time after time is highly impressive.

As well as a commitment to sustainability the company has recently opened its fifth factory to digitally print fabric in the UK rather than import it and set up its own skills academy which aims to train the talent of the future.

Christopher Nieper, Managing Director of David Nieper Ltd commented: “We are absolutely thrilled to have been recognised in these prestigious awards which is a real triumph for our family business. We take both our social and environmental responsibility seriously, so being recognised for Sustainability and Developing Future Talent, as well as being the best amongst our peers, means a huge amount to the company.”

Claire Almond Director, Business Development EMEA at Hulft said: “Britain is one of the world’s biggest manufacturing nations, and it is a great privilege to be working with MAKE UK to help support and champion UK manufacturing. The sector is facing significant change, as a result of what is being referred to as the 4th industrial revolution, and it is important that businesses are given the right opportunities to properly position themselves for the future.”

Other major winners on the evening included Blyth based Universal Wolf which took away both the business growth award and was also named SME manufacturer of the year, while the next generation of Apprentices was also recognised with winners coming from BAE Systems, Siemens, British Engines and MBDA.