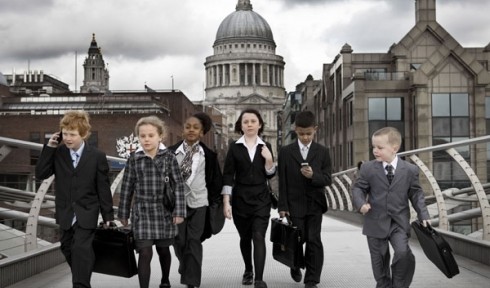 A £10 note will be given today to each of the young people aged 19 and under registered to take part, with the challenge to come up with creative and enterprising ideas that make money and make a difference – and to return that £10 at the end of the month.

Winners will be chosen from three categories: under 11s, 11-14 year olds and 14-19 year olds – with winners selected for the best business idea, the most profit generated and the positive impact made on their community. In 2009 16,000 young people took part in the competition and the top 100 entries generated an average individual profit of £42.

The children taking part have the chance to win the money can’t buy prize of a one to one with a leading entrepreneurs including Peter Jones, Eden Project founder Tim Smit and CEO of Firebox and Moshi Monsters Michael Acton Smith. Six winners will also each be awarded £100 start up capital and support from a business mentor to help them develop their entrepreneurial ideas.

Make Your Mark with a Tenner is backed by a team of leading businessmen and women, including the competition’s mastermind, serial entrepreneur Oli Barrett.  Entrepreneur Peter Jones, the founders of Bebo Michael and Xochi Birch, and the Big Lottery Fund are financial backers of the challenge, lending a total of £400,000 to students across the UK for the month of March.

Launching the competition, Peter Jones, Chair of Enterprise UK said: “Make Your Mark with a Tenner empowers young people to make their ideas happen. We know that young people are increasingly concerned about the challenges society faces, and we’re aiming to show young people that by acting on an enterprising idea, it is possible to make money and a real difference.

“Make Your Mark with a Tenner harnesses the unrivalled energy and creativity of young people. Their fantastic achievements increase each year that we run it, proof that if you trust young people to act entrepreneurially they will rise to the challenge.”