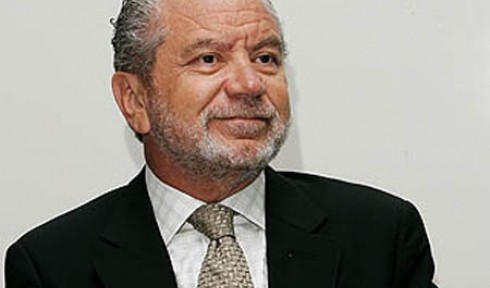 Speaking at the British Library Business & IP Centre to a
crowd of paying small business owners,  Sugar established he
wasn’t there talk about The Apprentice or deliver a speech,
preferring to take questions from the floor as ‘they were who he
was there to help’.

“I don’t need to be doing this, I’m not doing it for a new
challenge or anything like that, I’m here to give something back,
so you can glean what you can from my experience,” he asserted.

Honourable intentions then, but exactly what did Sir Alan share
with the 300 small businesses in attendance and those watching via
live webcast – and what did we learn about the validity of his
role?

As we know only too well from The Apprentice, Sugar specialises
in a hackneyed line of ‘telling it like it is’. A self-professed
‘thick bloke from the East End’, he physically recoiled and shifted
in disgust at the slightest suggestion small businesses weren’t
receiving sufficient support – especially from the banks.

His recent rejection of small businesses decrying a lack of bank
lending as ‘moaners living in Disney World’ clearly wasn’t an
aberration – and if his brief from Downing Street is to deliver a
tough message of self-reliance, then he’s been perfectly cast.

Self-made from the old school, he was keen to remind a younger
audience, ‘When I started out in 1966 there was no question of
going to a bank and asking for money’ and that ‘until now too many
people have been given too much money to play with’.

Instead, he argued, businesses should spend more time proving
their idea works and gaining expertise in a sector before
starting-up and seeking finance: “I didn’t leap out of bed one day and suddenly decide ‘right I’m
going to start my own business’, I worked for several years first
and gained expertise in a trade. That’s the problem with young
people, they think it’s cool. It’s not cool, it’s tough.”

‘Learn from your mistakes’, ‘only work with people who share
your vision and culture’ and ‘focus on your customer’ were Sugar’s
other snippets of advice – but it was tough-love truths such as
‘don’t expect hand-outs’, ‘don’t expect anyone to tell you how to
do it’, ‘you’ve either got a good idea or you haven’t’ that were
most enthusiastically dished out.

Lots of real-world common sense there, and few could argue with
what Sugar claims is his single, most important piece of advice:
‘Start small and with your own money.’

Unfortunately Sugar’s bluntness proved as limiting as it did
refreshing. His ‘telling it like it is’ style doesn’t allow for
opinions outside his own viewpoint or experience. As Sir Alan Sugar
the self-made millionaire entrepreneur and star of The Apprentice,
his brash ‘take me how you find me’ arrogance has a charm and no
shortage of value – he’s been there and done it, after all.

But as a public servant, let alone advisor to government and
businesses, it simply doesn’t work.

The problem stems from Sugar’s belief “entrepreneurs are born
and you can’t learn to be one”.

He actually satisfactorily
clarified this claim by drawing a distinction between entrepreneurs
and small business owners, who can learn and develop skills as they
go along – only to then contradict himself again when they asked
for his help.

On too many occasions he dismissed perfectly valid requests for
his views, insight and tips from those very people, with irritated
shakes of the head or a cursory ‘you’ve either got it or you
haven’t’ or ‘you shouldn’t be in business if you don’t know
that’.

Sugar also seemed to forget that unlike in the Apprentice
boardroom and those of his own companies, as Tsar it is his duty is
to listen to small businesses – not just dictate to them.

Amid numerous ‘haven’t you listened to a word I’ve said?’
Apprentice-esque soundbites last night, was a tellingly unsavoury
exchange, where he resorted to mocking a young entrepreneur who’d
dared to challenge Sugar by revealing how he’d started and run two
successful businesses in sectors he’d had no previous experience or
expertise in.

“So you’re telling me everything I’ve said is a load of
bollocks?” was Sugar’s retort – and he wasn’t finished. “I don’t
believe you and you shouldn’t poison the minds of the rest of the
people in the room with that bullshit.”

And this from a man who made computers then bought a football
club?

As wise as Sugar’s previous words were, there are of course
thousands of businesses who are exceptions to his rule and his
inability to acknowledge this showed up his limitations as a role
model or policy influencer as much as it did his lack of courtesy.
Sugar’s experience outside his own sector and style of leadership
is questionable; and if there is more to him, his comedic
straight-talking prevents us from seeing it.

All of which begs the question, if he believes entrepreneurship
can’t be taught; has a reluctance to offer advice beyond ‘work it
out for yourself’; and hasn’t the deference to effectively
communicate with people lacking his own ‘gut instinct’ mentality,
then what’s the point of Tsar Sugar?

Natural high-achievers rarely are great nurturers of others –
truly talented footballers, to whom the ability to drift past
players and deliver pinpoint passes is instinctive, can rarely
coach others on how to develop the skills they never thought about.
And I suspect that’s the problem with Alan Sugar.

Yes, Sugar’s a brilliant businessman, a worthy ‘boy done good’
role model and his message of self-reliance is unquestionably of
the time – but after that, the role of Tsar is ill-fitting and one
he doesn’t look comfortable in.

His dutiful defence of Business Link call centres reading advice
from scripts was painfully see-through, while championing
enterprise and entrepreneurial thinking in schools clashes with his
‘you can’t learn it’, ‘business books are only good for propping up
wonky tables’, ‘learn a trade first’ mantra.

Heavyweight entrepreneur you can learn lots from studying?
Undoubtedly. Effective Enterprise Tsar? No.

This column is of course also featured on Smarta.com