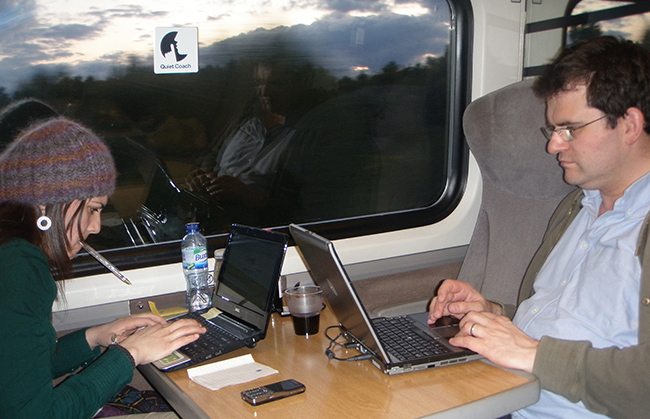 Researchers at Heriot-Watt University have developed a satellite antenna that could end frustration for millions of rail passengers.

It has been designed to provide high speed broadband on the move without the breaks in connection that plague many rail journeys, particularly in rural areas.

They say it could also be adapted to provide fast broadband aboard airliners much more cheaply than existing systems.

Gone are the days when a rail journey meant the morning paper, a cuppa and peace from the demands of work for a while.

And our smartphones and tablets don’t just give us the ability to reply to emails and work on spreadsheets.

Others value the opportunity to interact on social media or watch amusing videos of kittens.

But if you’re on a train that can be hit and miss to say the least.

Even if your carriage has wi-fi, whether you can use it to contact the rest of the world typically depends on the quality of the mobile phone network outside.

Mobile networks tend to cover the built up areas where there are more customers. Even there, the masts weren’t located to favour railway lines.

In rural areas the problem of “notspots” – areas of poor or no signal – is more acute.

Given that at the last count there were almost 1.8bn rail passenger journeys in the UK every year, that’s a lot of watching those irritating little spinning wheels that tell you your device is trying in vain to connect.

The alternative is to connect the train wi-fi to a satellite. But this also has its problems.

Unless a satellite is geostationary, orbiting above a fixed point on the Earth’s surface, it is moving across the sky.

To establish a link, an antenna has to maintain contact with one or more moving satellites from a train which is itself on the move.

Another problem: you can’t feasibly stick a satellite dish on top of a train. Certainly not in the restricted clearances of the UK rail network.

But the Heriot-Watt research, soon to become a spinout company called Infinect, has come up with a solution: a flat antenna a little over half a metre across. Just right for the top of a train carriage.

Research engineer Samuel Rotenberg says it will communicate with satellites throughout a journey.

“It’s fairly lightweight, at a fraction of the cost of existing solutions and will provide global coverage,” he said.

George Goussetis, professor of antenna engineering at Heriot-Watt, is principal investigator on the project.

He says it has taken a decade of research to get from the basic idea of satellite-equipped trains to market.

“There’s been a lot of investment in being able to deliver broadband connectivity via satellite,” he says.

“There have been multi-billion investments in the space sector, a lot of new standards – and it looks like the flat panel antenna is the missing piece in that puzzle.”

Mr Rotenberg is confident they’ve created that piece, and he says it offers much more than being able to update your social media profile from seat 16B.

Linking the train to the “internet of things” will improve the security of the train and all aboard.

“When they are in a remote area, the train operator doesn’t have any control over the train,” he says.

“They don’t know where they are, what speed, if there is an accident or an emergency.

“They are completely blind – and they need information.”

A data stream from sensors via satellite will deliver it.

The prototype antenna is expected to enter field trials with a big rail operator before the end of 2020.