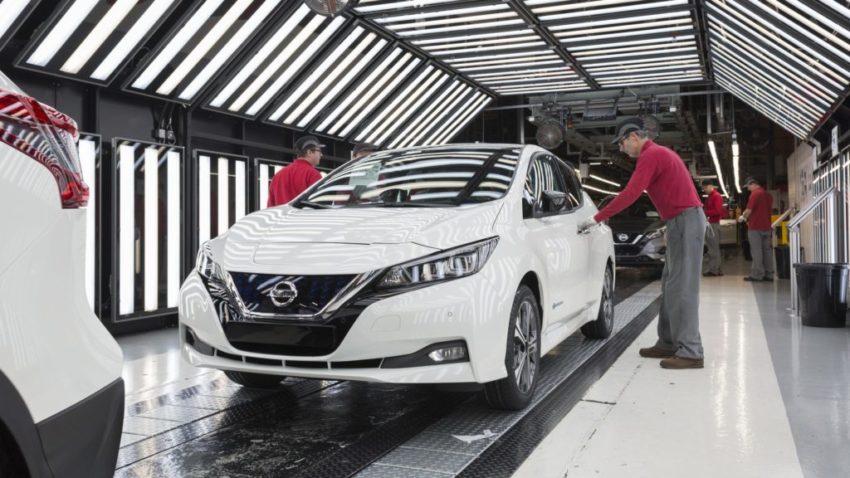 Nissan could abandon the EU and expand its operations in the UK to get a competitive advantage after Brexit, it was claimed today.

The Japanese company has reportedly drawn up plans to ‘double down’ on its presence in Britain if tariffs are introduced across the Channel next year.

The move is designed to capitalise on higher costs of other car manufacturers – with suggestions Nissan could end up selling four times as many vehicles in the UK as a result.

According to the Financial Times, the scenario – one of a number of options being considered – would see plants in Barcelona and France closed down.

Instead, production in Sunderland would be ramped up.

The tactic emerged as the UK and EU kick off another brutal round of negotiations, after Brexit finally happened on Friday night.

They are wrangling over trade terms at the end of the ‘standstill’ transition period in December.

Boris Johnson has called for a zero-tariff, zero-quota arrangement – but dismissed demands from Brussels to align with their rules to get the package.

Nissan has apparently calculated that if companies such as Ford and Volkswagen face tariffs, its UK-made models could gain a significant competitive edge.

There are claims the firm’s market share in the UK could grow from 4 per cent to as high as 20 per cent.

However, the plan is said to have been put together before the arrival of new chief executive Makoto Uchida.

And a spokesman for Nissan Europe told the FT: ‘We deny such a contingency plan exists.

‘We continue to urge UK and EU negotiators to work collaboratively towards an orderly balanced Brexit that will continue to encourage mutually beneficial trade.’

The Sunderland plant produced 346,535 vehicles last year, made up of a combination of Juke and Qashqai SUVs, Leaf electric models and Infiniti Q30 hatchbacks.

That’s 21 per cent fewer than the total output in 2018, as waning demand for diesel cars impacted manufacturing outputs.

Despite this, the Qashqai – the UK’s best-selling SUV for the last decade – was the most-produced car in the UK over the last 12 months, the Society of Motor Manufacturers and Traders confirmed.