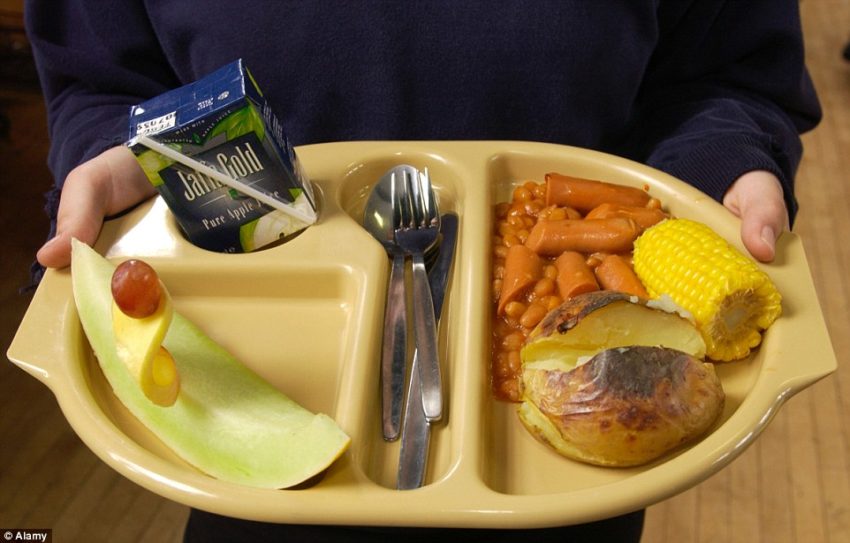 Legal school meal nutrition standards may need to be amended, or discarded, in the event of a no-deal Brexit, according to internal local council planning documents.

The standards are designed to make sure school children are fed healthy food.

Many councils say school meal costs will rise and funding for free school meals increase if there is no-deal.

The government said the food industry was “well versed at dealing with scenarios that can affect food supply.”

“We have a highly-resilient food supply chain and consumers in the UK have access to a range of sources of food. This will continue to be the case when we leave the EU.”

Some councils are anticipating they will not meet nutrition standards because of a rise in food prices and restriction of choice anticipated after a no-deal Brexit, particularly on fresh imports from Europe.

For example, North Ayrshire Council says it “might need to amend school nutrition standards”, in its internal Brexit planning document.

Local councils are legally obliged to provide high standard food to vulnerable users of public services and to manage the food supply challenges of leaving the EU without a deal.

Other councils, such as North Tyneside, report that “special dietary requirements may be difficult to meet” and that “if fresh produce is difficult to come by” schools should “increase use of tins and frozen goods”.

Some also mention the possible use of food banks. Slough has contacted food banks in its area to check contingency plans for food shortages, and some Scottish councils have already increased funding for extra provision from food banks.

The government says that school food standards must continue to be adhered to post Brexit, but that schools have “significant flexibilities, which they can refer to if certain items are in short supply.”

Hastings Council’s internal Brexit risk document even goes as far as saying: “There might be the need for rationing. The severity would depend on what was available and particularly the duration of any shortages.”

Insiders suggest this is a reference to the prevention of stockpiling, more than a return to wartime ration books.

The documents seen by the BBC date from the end of last year – up until last month – but predate the appointment of Boris Johnson as prime minister.

Most take at face value the government’s national assessment for March that there will be no impact of a no-deal Brexit on overall food supply, but there could be an impact on price and choice.

An October no-deal Brexit would come, however, at a time when the UK is particularly dependent on European imports for its fresh food, and when there is little to no excess warehousing space, unlike in March.

One catering industry veteran, Andy Jones, the chair of the Public Sector 100 Group of caterers, backed the councils: “Given a no-deal Brexit, they’re being very sensible. They’re being very cautious, and rightly so, we’re going into something that we don’t know about, we’re going to the unknown.

“If a no-deal Brexit happens, I feel that the supply chain long term will absolutely be under pressure. And that will affect the most vulnerable in society.”

But he confirmed that menus would change and that “certain nutritional standards will have to be altered or adapted for a short period of time” for schools and hospitals.

He said public services such as new hospitals, had been built without food storage, and that caterers were now effectively “fighting each other for space” in warehouses.

Bidfood, one of the key suppliers to schools, hospitals, care homes and prisons, said it was now preparing for no-deal again having bought up warehouse space and assessed and identified alternatives for 400 key food imports to store.

“The key areas that we’re looking at in terms of making sure we have surety of supply is around those key things that we import, like pasta, tuna, tinned tomatoes, olive oil, chips, french fries, rice. These are not exotic commodities, these are staples of everyday life, and we want to make sure that all of our customers can get those,” said Andrew Selley, chief executive of Bidfood.

He said there was only limited scope to replace imports with domestic production. “Because of our changing tastes, unless we’re going to go back to a menu based on the 1700s, we are going to look at imported products and imported tastes and imported flavours.”

However, he said his company would be “ready” to take care of key customers and he does not anticipate “calamitous” problems.

“There will be challenges around availability, delays at ports and around currency fluctuations,” he said.

He added that the government would have to increase funding for free school meals, and that it would be “more complicated” but manageable for suppliers to meet more stringent standards in Scotland based on nutritional values.

The Department for Environment, Food and Rural Affairs said it was meeting regularly with industry and retailers “to make sure we are prepared for all scenarios as we leave the EU.”

“The food industry is well versed at dealing with scenarios that can affect food supply, from adverse weather damaging crops in other countries to transport issues abroad. The UK has robust supply chains across a range of countries to provide our food, in addition to the countless domestic food producers across the UK,” it added.