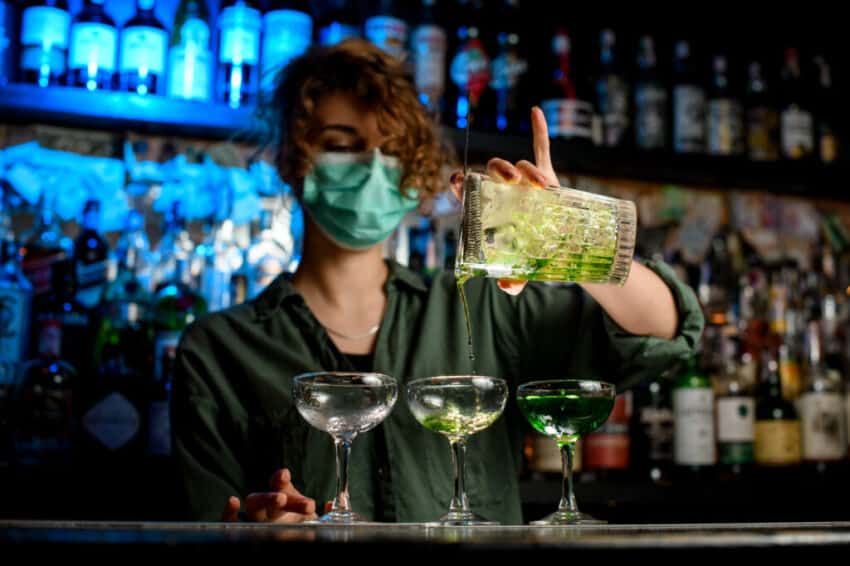 Sales at pub, bar and restaurant chains plunged by more than a third on the same period last year after a 10pm coronavirus curfew was imposed across most of the UK, according to new analysis that reveals the extent of the impact on hospitality.

The first hard figures from the days after the curfew was imposed drew anger from trade bodies and are likely to reinforce calls to reconsider a measure that critics say only drives people to gather elsewhere, while causing significant economic damage.

Takings at 7,000 chain restaurants, pubs and bars were slightly above 2019 levels last Monday, according to the industry analysts CGA, as the UK enjoyed unseasonably warm weather and venues could operate normal opening hours.

The next day, after Boris Johnson confirmed rumours of an impending 10pm curfew, sales were 8% down, before slumping further during the week as restrictions came into force, first in England and Wales, then followed by Scotland.

By Friday sales were 37% below the total for the corresponding Friday last year. London and Scotland, where many small city centre pubs have remained closed throughout the pandemic, were 47% and 44% behind 2019 respectively. Late-night bars were the worst hit, with sales on Friday two-thirds below the equivalent day of 2019.

The chief executive of the industry body UKHospitality, Kate Nicholls, said the figures were “in line with what we are hearing”. “At this rate, many of them are going to be out of business pretty soon. This curfew was brought in without justification and it is quickly killing our sector.”

“If the curfew doesn’t work in reducing infections of the virus, it should be reviewed immediately to give pubs a proper chance of a recovery,” she said. “If it doesn’t work and isn’t removed then it will mean that hospitality businesses and pubs are unfairly singled out.”

Both trade bodies have repeatedly called for a sector-specific financial support package to see the industry through the winter.

Despite the dismal sales data, the CGA’s director of client services, Jonny Jones, said the industry could still make up lost ground.

“Whilst there is no doubt that the new regulations have dealt a further blow to operators and sales have been significantly impacted in the first weekend, there has so far been very little time for the market to respond,” he said. “One of the many great things about the hospitality industry is the ability to innovate and adapt to new market conditions and consumer demands.”

But parallel estimates of week-on-week trading will reinforce concerns expressed by trade bodies this week that many companies will not survive the winter, triggering thousands of job losses.

Sales data compiled by S4Labour, which provides software for 2,000 hospitality venues, showed overall sales down 13% in the Thursday to Sunday period following the imposition of curfews, compared with the weekend before it.

There are approximately 100,000 pubs, bars and restaurants in the UK, racking up weekly sales of about £800m, according to the leisure industry analyst Mark Brumby, of Langton Capital.

If the figures from S4Labour are representative of the wider impact, the industry could be facing losses of at least £100m a week. If the sales data compiled by CGA does not improve, losses could be far higher.

“The result is perhaps a cost to the hospitality industry of some £100m per week, virtually none of which cost will now be supported by government,” said Brumby. “It is likely that staffing decisions will be readjusted downwards accordingly.”

The figures emerged as Simon Emeny, the chief executive of pub company Fuller’s, told the BBC that the chain could be forced to cut 10% of staff at its city centre pubs. It has been hit by the government’s advice to work from home, as well as by a curfew he described as “illogical”.

The bar chain Revolution has already announced proposals that could result in the closure of its city centre venues, citing the curfew.

A cross-party group of 25 MPs called on the government to publish scientific evidence for the measure this week, amid concern it is proving counterproductive.

Paul Crossman, who runs three pubs in York, said: “The government has squandered the goodwill of publicans, who have made every effort to put measures in place. We feel stabbed in the back. If they’re going to get any goodwill back, they’ll need to do a U-turn.

“We’re an easy target but it’s devastating economically. I cannot understand what they’re thinking. The scenes at the weekend, where people were crowding outside venues, shows that this doesn’t make people safer. People aren’t ready to stop their night at 10pm.”