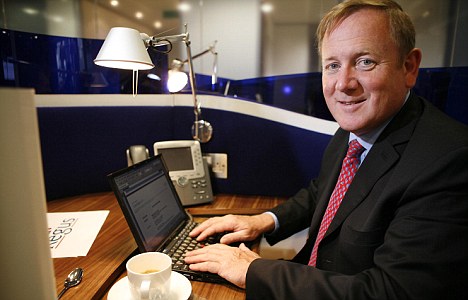 The chief executive of IWG, who has been criticised for his treatment of customers who rent serviced offices, made a £3.6 million profit from buying shares last month.

Mark Dixon, founder of the business that previously was known as Regus, topped up his shareholding when IWG’s shares were at a seven-year low, paying £5.5 million in four share purchases. Those shares are now worth £9.1 million after the share price rose.

Speaking from his home in Monaco yesterday, Mr Dixon, 60, said that making a personal profit had been “the last thing on my mind” and that he had worked 12-hour days to support the business during the pandemic. His decision to buy shares was “certainly not to make money”.

Mr Dixon owns 249 million shares in IWG, or 28.6 per cent of the company, which has a market capitalisation of £1.9 billion. Its shares are worth 50 per cent less than they were at the start of the year.

IWG is the world’s largest flexible officer operator, with 3,338 locations in more than 100 countries. Regus and Spaces are among its brands it operates in Britain, where it has 320 venues.

It has been accused by some customers of trying to profit from the coronavirus crisis by asking small businesses to sign up to longer memberships in exchange for temporary rent cuts or deferrals. IWG, which does not own its locations, has asked landlords to allow it to defer its rents for three months. It has furloughed about 500 staff using the government’s job retention scheme, while asking some staff to volunteer to provide essential services at its centres.

More than 1,000 people have signed a petition calling on IWG to freeze membership or provide more substantial discounts.

Edward Butler-Ellis, a consultant who works from a Regus office in London, said: “He [Mark Dixon] should perhaps consider how sustainable his profit will be if the customers he relies on cancel their contracts, or worse, fold, because of his company’s attempt to extort money from customers.”

Mr Dixon, who is taking a 50 per cent reduction in base salary, said: “The idea that we are somehow profiting from customers is absolutely not the case.” He said he had not been given any rent discounts by landlords, but some had agreed to defer payment to support IWG’s cashflow. “The whole business doesn’t stop just because there’s a pandemic,” he said. “It’s important that our business can continue afterwards. This is a question of working together.”