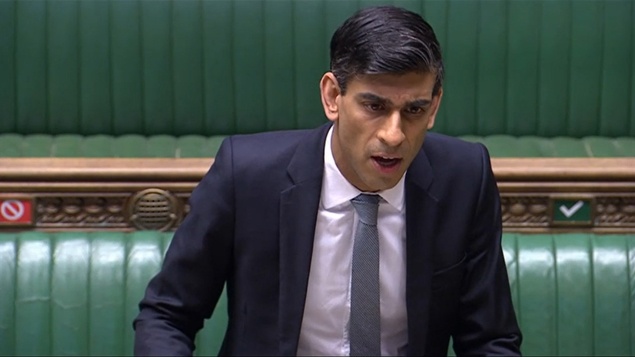 The government and firms will top up workers’ wages covering up to two-thirds of their hours for the next six months, the chancellor has said.

Rishi Sunak said the Jobs Support Scheme will replace the furlough scheme when it ends on 31 October.

He set out his “winter economy plan” after the government introduced new measures to stop the spread of the coronavirus.

There are fears firms will make mass job cuts when the furlough scheme ends.

Nearly 3 million workers – or 12% of the UK’s workforce – are on partial or full furlough leave, according to the Office for National Statistics.

The chancellor said that employees will have to work for at least a third of their normal hours to quality for the new scheme, which begins on 1 November.

Businesses that have borrowed money through the government’s loan scheme will also be given more time to repay the money.

All small and medium-sized businesses are eligible, but larger businesses must show their turnover has fallen during the crisis. Employers can use it even if they have not previous used the furlough scheme it replaces.

A “pay as you grow” scheme was announced for businesses, allowing them to extend their bounce back loans from six to 10 years, reducing their payments

Businesses can also move to interest-only payments or suspend repayments for six months if they are “in real trouble”. Credit ratings will be unaffected

And a VAT cut for hospitality and tourism companies will also be extended until March. The cut from 20% to 5% VAT – which came into force on 15 July – had been due to expire on 12 January next year.

She says it is a “relief” that the government has “U-turned”, but says the delay in introducing the new scheme will have impacted on businesses’ confidence.

The deadline for redundancy consultations for large firms before the end of the furlough scheme came and went last week, she says, “without a word from this government”.

Commenting on the announcement, Dame Carolyn Fairbairn, CBI Director-General, said: “These bold steps from the Treasury will save hundreds of thousands of viable jobs this winter. It is right to target help on jobs with a future, but can only be part-time while demand remains flat. This is how skills and jobs can be preserved to enable a fast recovery.

“Wage support, tax deferrals and help for the self-employed will reduce the scarring effect of unnecessary job losses as the UK tackles the virus. Further business rates relief should remain on the table.

“Employers will apply the same spirit of creativity, seizing every opportunity to retrain and upskill their workers.

“The Chancellor has listened to evidence from business and unions, acting decisively. It is this spirit of agility and collaboration that will help make 2021 a year of growth and renewal.”

Unions have accused Chancellor Rishi Sunak of using a plaster to cover a “gaping wound” while jobs have already been lost.

Mark Serwotka, general secretary of the Public and Commercial Services union, said the furlough scheme should have been extended beyond next month.

“Any support for jobs and key industries during this unprecedented global pandemic is to be welcomed,” he said.

“However, the chancellor’s measures are akin to using a plaster to cover a gaping wound.

“Our members in the commercial sector, aviation and culture are already being threatened with hundreds of redundancies, as employers seek to capitalise on the economic fallout from Covid-19.”

However the support measures have been criticised by Andy Chamberlain, Director of Policy at IPSE (the Association of Independent Professionals and the Self-Employed), for not going far enough, saying: “The support for the self-employed announced today is woefully inadequate. Although it is right for the Chancellor to extend SEISS, the support announced today still excludes one in three self-employed people.

“Limited company freelancers and the newly self-employed almost entirely missed out on support in the last lockdown and have faced bleak months of financial devastation. Now they face a dark winter ahead unless the government does more for them.

“Based on the drastic financial hit self-employed people took in the last lockdown, the new 20 per cent cap on support is likely to be nowhere near enough. As well as plugging the gaping gaps in support, government must follow the situation closely and be ready to raise the amount of support SEISS offers if needed.

“The self-employed sector has already seen a record drop in the first half of 2020 because of the unnecessarily large gaps in government support. The self-employed are vital for the economy and will be essential for economic recovery, but to play their part, they must get the support they need now. Government must do better for them.”

“The chancellor said they will target support at ‘firms who need it the most’.

“That must be fine-tuned so that the jobs of our members in the travel trade are saved and high-street travel shops don’t become a thing of the past.”