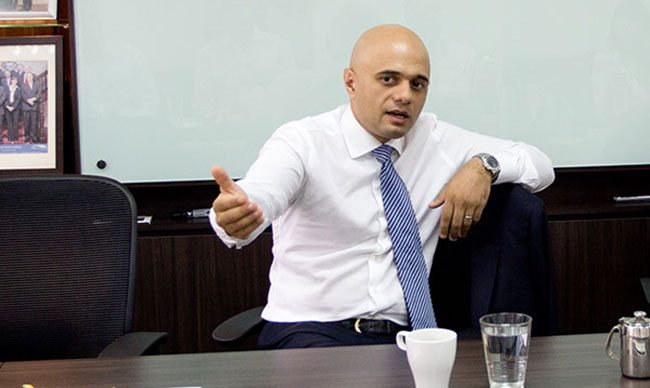 Sajid Javid is considering a change to stamp duty that would switch the tax burden from buyers to sellers.

It would ensure that first-time buyers never pay the tax and also help families buying bigger properties. However, it would result in larger tax bills for those who have benefited from soaring property prices and are looking to downsize.

The plan is one of a number of tax changes under consideration for a budget later this year. In his first interview as chancellor, Mr Javid told The Times: “I’m a low-tax guy. I want to see simpler taxes.” He said that he was looking at various options when asked about stamp duty reforms including reversing liability from those buying property to those selling.

He promised that the lowest paid would be first in line for tax cuts but also hinted that higher earners could benefit from changes. He also refused to rule out cutting rates for higher earners if that raised extra revenue. Mr Javid has previously highlighted the increased tax revenues that resulted from George Osborne’s decision to scrap the 50p rate of income tax for the highest earners in 2013.

He said: “If you are going to have tax cuts, I think you should always be thinking about the lowest paid.” However, he added: “I think taxes should be efficient. We want to set them at a rate where we are trying to maximise revenue, and that doesn’t always mean that you have the highest tax rate possible.”

During the Tory leadership election, Boris Johnson proposed lowering the top rate of stamp duty on the most expensive homes from 12 per cent to 7 per cent, saying it had become too high and was causing huge problems in London.

Reversing the burden would be a more radical — and progressive — move, ensuring first-time buyers would never have to pay. At the moment only first-time buyers of properties worth less than £300,000 are exempt.

Critics point out, however, that it would deter homeowners from downsizing. Stamp duty raises about £9 billion a year, although receipts have been hit by Brexit uncertainty recently.

Mr Johnson was also criticised during the campaign for proposing to raise the higher income tax threshold from £50,000 to £80,000, in a move that the Institute for Fiscal Studies think tank said would give a £9 billion tax boost to four million people among the top 10 per cent of earners.

The chancellor said he was prepared to ditch the present fiscal rules, including a target of eliminating the deficit by the middle of the next decade, so that he could fund an infrastructure investment splurge with borrowed funds. As a downpayment he will announce today the release of £600 million from a housing infrastructure fund for 50,000 new homes in high-demand areas in the south east and London.

Mr Javid denied that the Treasury was the “beating heart of Remain” and claimed that it was “100 per cent behind” the government’s new Brexit policy. He said that he was prepared to take “full advantage” of the “tremendous freedom” over taxes following a no-deal exit in a sign that VAT and business levies could be slashed.

He also revealed that preparations on supply-side reforms had “significantly picked up”. Mr Javid has previously argued for a bonfire of red tape to help businesses to cope with the disruption of crashing out of the EU.

He acknowledged that he was concerned about “choppy” markets amid signs that the US was heading for a downturn but insisted “there’s lots that’s very solid” about the British economy.

Mr Javid insisted he was prepared to stand up to Boris Johnson and would not “write every cheque”. Before a one-year Whitehall spending round in the first half of next month, he said the prime minister accepted that borrowing must be controlled and “not everything can be a priority”. He said he was “weighing the options” between a budget before or after Britain’s scheduled exit from the EU on October 31.

Mr Javid has also backed George Osborne, a predecessor and mentor, to become the head of the International Monetary Fund (IMF). “I think that George would make an excellent, absolutely superb head of the IMF. As you’ll know, these processes are never straightforward. But there’s still some time to play out.”