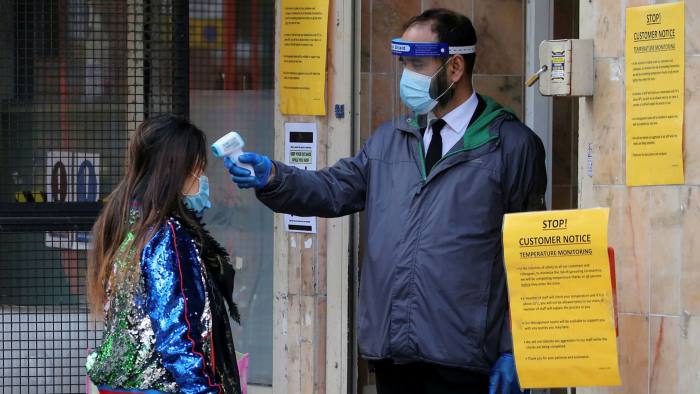 Openings for security guards and industrial cleaners increased in the week after Boris Johnson urged people to return to work, suggesting such roles will be in high demand as business resumes under strict social distancing rules.

A tracker published by the Recruitment & Employment Confederation, the industry body, showed the number of job postings for security guards and related roles was 3.8 per cent higher between 11-17 May than in the previous week, with 7,400 new openings.

Adverts for industrial cleaners rose by 3.6 per cent, while demand for health professionals, pharmacists and pharmaceutical technicians also increased.

“Health and social care workers being in high demand isn’t a surprise, but as more workplaces start to reopen, we are likely to see similar trends emerging for other roles,” said Neil Carberry, chief executive of the REC, adding that the tracker could help guide efforts to redeploy furloughed and unemployed workers into sectors where demand was returning.

Overall hiring remains depressed across the UK economy. The REC said the number of job postings fell by 28 per cent to 1.34 million between February and April. From 11-17 May, there were 950,000 job adverts in the UK, with the number of postings down from the previous week in every area of the UK, except for the north east of England, the REC said.

Some rural areas — for example, in parts of in Norfolk, Scotland and Northern Ireland also bucked the national trend — a pattern that could reflect farmers’ difficulties in finding UK workers to replace migrant labour.

The REC’s analysis is based on data gathered from thousands of online jobs boards by Emsi, a labour market data provider.

It suggests that while employers have cut back hiring dramatically in most areas, they are now preparing to reopen workplaces and bring more employees back on site — and have new staffing needs in order to meet strict rules on hygiene and social distancing, in particular to avoid bottlenecks at office entrances and as people move around buildings.

However, the roles that are opening up may carry risks: recent analysis by the Office for National Statistics showed that security guards were among the occupations suffering the highest coronavirus death rates, while the Institute for Fiscal Studies found new vacancies were concentrated in areas that involve working at close quarters with more exposure to disease.

The REC data suggests that hiring remains frozen in many sectors, including both those that have been shut down, and others where it is easier to work from home.

Job postings for dental nurses fell the most week on week, with a decline of 7.9 per cent, but there was also a marked drop in postings for programmers, architects and construction project managers.

Government measures allowing businesses to defer some tax payments, and urging debt forbearance, may also be affecting the jobs market: openings for debt collectors fell almost 6 per cent week on week, while adverts for tax experts were down 6.5 per cent.