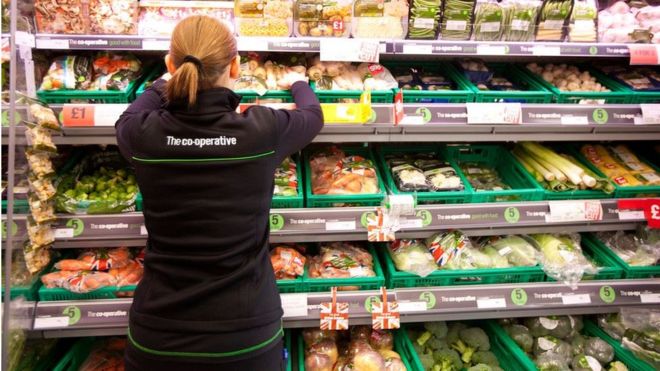 The Co-op shop workers, mostly women, say they are being underpaid compared with warehouse workers, who are mostly men.

The claim comes after similar actions against Asda, Tesco, Sainsbury’s and Morrisons.

The Co-op said it was “confident that our reward practices are fair”.

The first hearing for the claim was at Manchester Employment Tribunal on Friday.

Law firm Leigh Day is representing the workers, who are asking for up to six years of back pay.

The claim came about after the shop floor employees found they were being paid less than the men in the warehouses, said Chris Benson, Leigh Day’s head of employment.

They felt that they were getting “underpaid for the same effort”, and that their work was of equal value, he said.

The store employees were often working by themselves at the front of shops, with a colleague on hand at the back. They have “quite a lot of responsibility”, with little time to have a break or to go to the toilet, Mr Benson said.

The difference in pay between shop floor and distribution staff ranges from £1.50 to £3 an hour, which is “quite a chunk of their wages”, he said.

The workers were “amazed and disappointed” to find out the difference in pay, he added. “They are loyal to the Co-op.”

He continued: “The Co-op are a good employer. You wouldn’t expect them to discriminate on the grounds of gender”.

Mr Benson added that around 40,000 people may be eligible to bring claims.

‘Our practices are fair’

The Co-op said in a statement: “We have received a small number of equal pay claims. Unlike some of the bigger food retailers, we do not have large scale multiple claims.

“It wouldn’t be appropriate to comment on individual claims, but we will be defending these claims and are confident that our reward practices are fair.”

The first UK supermarket to face equal pay claims on differences in pay between shop workers and distribution staff was Asda, which has been fighting a long-running legal dispute over the issue.

Pay actions have followed against Sainsbury’s, Tesco and Morrisons.