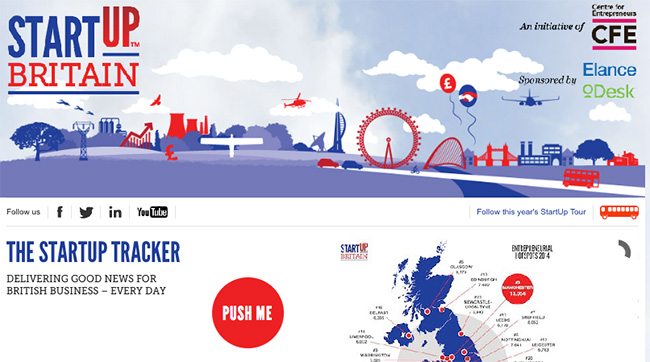 On the 4 February 2011 Stephen Croome decided to create a small notepad website to write about the people he met and his experience in the British startup scene. Given the subject matter he choose to register the domain startupbritain.co.uk for this site. An obvious and fairly non contentious choice which should have not caused any problems.

However to a great fanfare and supported by David Cameron and Sir Richard Branson a support body was set up seven weeks later to help give people looking to startup up their own business a boost.

The site launched with a .org domain and came slightly out of the blue as we at Business Matters and other media organisations only heard about it 48 hours earlier and there is no suggestion that Croome was aware of its existence when he registered his domain.

The launch of the government backed Startup Britain campaign website was dogged with controversy and as we reported at the time – following complaints from many readers – some of the ‘supporters’ were US based companies merely selling their services and many suggested that all the site was was mearly offering was cheap discount vouchers for various companies from O2 to Dell to AXA.

It should be reported that following this troubled start the Startup Britain campaign has resulted in record numbers of businesses starting up year on year – 440,600 in 2011 to 526,446 in 2013 – and some of the eight co-founders: Emma Jones, Oli Barrett and Michael Hayman received MBE’s from the Queen for their involvement in the scheme and their other work with UK startups.

However on 27 March 2014 Startup Britain was taken over by the not-for-profit think tank Centre for Entrepreneurs an organisation chaired by serial entrepreneur Luke Johnson and recently Croome’s received letters from the organisation and their solicitors.

Sharing an extract from one such letter Croombe said:  ‘I was amazed to receive a letter from their lawyers give that my ownership of the domain predates them and I have been using it from the outset to blog about Startups in Britain”

We note at the time the initiative was announced in 2011 you registered the domain name and since that time you have not utilised the website for any activities.

We would ask you to agree for the immediate transfer of the domain. As you are not a holder of a registered trademark or a company in the name of Start up Britain. Under ICANN rules you have no right to hold the domain in preference to the Centre of Entrepreneurs. If you agree to do this the Centre for Entrepreneurs will take no further action and agree to press no further claims on this issue.

However, if you refuse to do so Centre for Entrepreneurs will look to enforce their legal right to utilise their trading name and domain and may file a claim for damages and all the fees for transfer of the domain.

We spoke to Chris Sherliker, partner at London law firm Silverman Sherliker, who specialise in IP and Trademark issues to give us his opinion of the situation. He said: “

It really is a bitter irony that the  Startup Britain service, that I understand was originally a Government initiative, is threatening legal proceedings against…a start-up business, whose own entrepreneurial initiative seems to have pre-dated that of the Government in any case.

Since the .co.uk was registered some 6 months prior to the filing of the Startup Britain trade mark, it is difficult to see that they can be said to have acted in bad faith which it will be necessary to show if they try to enforce a transfer of the .co.uk using the UDRP procedure.

Also if the .co.uk started using the mark before the original launch of the Govt initiative, it may have an ‘earlier right’ defence under section 11(3) of the Trade Marks act 1994.”

As you can see it would appear that legally Croombe’s position is strong and it is amazing that the Centre for Entrepreneurs are even pursuing the matter and definitely through a legal route.

However very worryingly when we spoke to Sherliker about his opinion on the startupbritain.co.uk dispute he also concluded our discussion by saying: “I am acting for at least two other clients who are actually at logger-heads with the UK Government over the commercial use of names adopted by the Government for its ‘initiatives’. For a government that is apparently committed to advancing the cause of business taking a commercial approach to these name conflicts with a view to a negotiated settlement rather than by threatening ‘big stick tactics’ against the little guy would be a more sensible approach.

It would be even better if the Government did some proper due diligence on the legal availability of a name in the UK marketplace before adopting a brand often to the detriment of businesses who have invested heavily in building up goodwill in the same or a similar brand.”