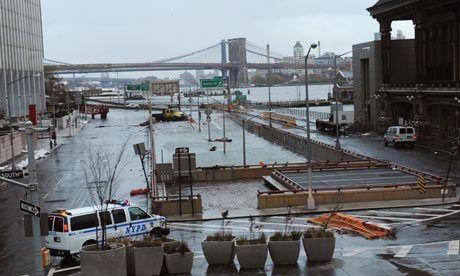 New York underwater is a favorite image of disaster-movie makers. In the Day After Tomorrow, a cruise liner sails by the New York Public Library, while the Statue of Liberty stands largely submerged. In Artificial Intelligence, Jude Law helicopters into an office on the high floors of Rockefeller Center, the rest of the city long buried under sloshing waves for eternity.

Those scenes carry cinematic weight for obvious reasons: New York has an aura of invincibility, the kind of bustling, tough, sharp-elbowed place that stops for nothing, reports The Guardian.

Part of this has to do with New York’s geography. The city has natural advantages – billion-year-old Manhattan bedrock that can hold miles of heavy skyscrapers, a harbor and shipping ports and airports that allowed $85bn of exports from the New York region in 2010: that’s over three times the exports of the entire country of Greece. New York is the largest regional economy in the United States, generating a gross metropolitan product of $1.28tn in 2010. New York’s economic output – like those of Los Angeles and Chicago – is greater than that of 45 of the 50 states in the union.

So, it is startling, as jarring as it is in disaster movies, to see that Hurricane Sandy caused large swaths of New York to be underwater, without power, and, largely, not doing much business. In a city so bright at all times that the stars are hard to see, the streets and skies were suddenly nearly black for miles. New York has had blackouts before: as recently as 2003, a city-wide blackout shut down operations, albeit without flooding. As SIFMA, a financial-industry group, pointed out:

“This is the first time weather has closed markets in New York for two consecutive days since a blizzard in 1888.”

SIFMA is an organization made up of every major financial firm in New York, so it has some power when it recommended that they suspend trading in bonds on Tuesday. It’s still up to those firms to decide if they want to; they’ll be making a decision between the potential loss of profits and the tremendous inconvenience to employees, many of whom live in areas where power is iffy and transportation sketchy.

It is currently impossible to estimate how the damage from Hurricane Sandy will affect New York. As far as the financial markets go, the NYSE Euronext said that it was on track to re-open on Wednesday, as did the Nasdaq exchange. The exchange’s contingency plan calls for a shift to electronic trading – still a difficult proposition, as far as the markets go, because even for electronic trading, the traders currently need access to their desks and computers.

At a minimum, it is impossible for most people to get to work in the city, which affects the locus of several industries, including finance, advertising, healthcare and the arts. The city’s transportation lines, bridges, and tunnels were shut down for nearly two days, and at the latest report, the subways may be down well into next week. Footage from the news on Monday night showed water flowing freely, carrying the smell of fuel and burning electricity, into subway tunnels and through the Midtown Tunnel, which carries 80,000 a cars a day into Manhattan from Long Island.

New York Governor Andrew Cuomo suggested that Wall Street should be “online” again by Wednesday. But that is of little comfort if the workers can’t get there, and the majority of the 168,700 financial industry employees in New York still take public transportation of some kind.

The stock exchanges were also closed, and the bond markets were largely frozen, though still partially open. JFK airport, a hub for international business travelers, may re-open on Wednesday, but LaGuardia airport, which mostly carries domestic flights in the US, is likely to stay closed as it deals with the aftermath of flooded runways. Barclays Capital analysts called the situation “the Hurricane Sandy standstill”.

Goldman Sachs, whose building downtown was one of the few to retain power because of its powerful backup generator, told employees that its downtown headquarters would be closed on Tuesday. The firm still planned to do business with clients, however – depending on staff in London, Salt Lake City, Utah and “other offices around the world”

“Unless otherwise instructed by divisional management, you should plan to stay home,” the firm’s chief operating officer advised employees who considered coming into the office on Tuesday. Morgan Stanley, likewise, reminded employees that it would move some functions to other offices outside New York, and that many employees could work from home.

“We also expect to be open for business and functioning when the US markets open,” the firm said in a statement. HSBC said its branches were closed in in New York State, Connecticut, New Jersey, Pennsylvania, Delaware, Maryland, Washington, DC, and Virginia, with updates on its website. The bank encouraged employees to stay home. Barclays kept all of its New York offices open, with the exception of an office across the river in Jersey City, which was flooded. “All staff with non-essential roles are currently being asked to work from home,” a spokesman said.

Last year, when Hurricane Irene hit, banks like Goldman offered vouchers to employees that they could use with private car services, to get to work even when the subways were out. But this time, with so many roads flooded, it will take time for even car services to get back on the roads.

All of this is likely to hit revenues, at least noticeably, in an industry that can already ill afford it. The financial sector has been shedding jobs – and shrinking salaries – for several years. New York State Comptroller Thomas DiNapoli noted:

“[I]n the first half of 2012, the [financial] industry [in New York] earned $10.5bn and is on pace to earn more than $15bn by year’s end, unless adverse developments erode profitability like last year.”

Last year, those “adverse developments” were the European debt crisis. It seems unimaginable for Hurricane Sandy to be able to cause the financial industry losses on that scale – but the business interruption certainly does not help. Anthony Peters, a London-based strategist for SwissInvest, confessed that New York’s future was the locus of most financial concern, telling clients:

“Monday trading in Europe was totally anticlimactic and I, for one, knocked off early only to go home and watch microphone-bearing news reporters in wet weather gear standing in the open air in New York City telling us that it was getting wetter and windier.”

For native New Yorkers, or those who had lived in the city for decades, the damage was unprecedented. New York always keeps going – except this week, when it has largely stopped. Governor Cuomo told New Yorkers that the city needs to update its systems. “We seem to have a 100-year storm every two years,” he said in a press conference.

It’s hard to imagine the city – and its business centers – going through this that often.