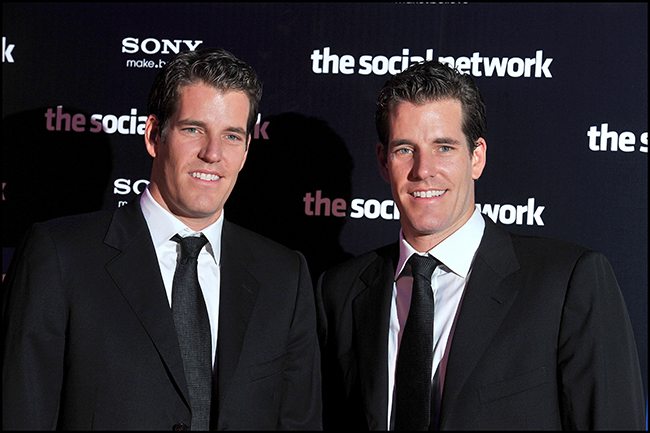 Cameron and Tyler Winklevoss, whose claims that Mark Zuckerberg stole their idea for Facebook was the subject of hit movie The Social Network, reportedly hold $10 million (£6.5 million) of Bitcoin and have filed paperwork to create an Exchange Traded Platform (ETP) that will track the price of the virtual currency, which is traded over the internet independently of Governments and monetary authorities.

The pair have set up The Winklevoss Bitcoin Trust and plan to sell $20 million (£13 million) of shares to investors. The shares will offer exposure to the yo-yoing price of Bitcoin with, the twins claim, minimal credit risk.

But Professor Rushman, of Warwick Business School, feels neither investors nor the Bitcoin movement will be well served by the twins’ plans.

“It is not going to help Bitcoin’s quest for respectability to have associations with such thoroughbred vulture capitalists,” said Professor Rushman, who worked at BlackRock and Barclays Global Investors before moving into academia and teaching finance.

“The less people think of Bitcoin as a ‘get rich quick’ investment, the better its chances of survival. For its own sake, it needs publicity for its qualities as a neutral and universally accessible currency with a transparent exchange rate and immunity from central bank manipulation.

“If the ETP goes ahead, it will be interesting to see how many investors it attracts as it would seem that anybody keen on Bitcoin as an investment will already hold them. Why would someone want a security offering all the same risks as the Bitcoin, but with an extra layer of management and fees inserted? Even the justification that it is possible to short-sell the proposed ETP looks flimsy, given that one can already short the Bitcoin in the forward exchange market.”

The virtual currency has become progressively more popular since the financial crash and its proponents say it will revolutionise banking. It is created by the application of a mathematical formula and was invented four years ago by a person or group using the name Satoshi Nakamoto. The price of Bitcoin, which is limited to 21 million in circulation, has swung between $14 and $266 this year.

Professor Rushman believes the proponents of Bitcoin should concentrate on gaining acceptance among regulators if it is take hold in the world permanently.

“None of the US regulatory authorities have figured out how to regulate Bitcoin, as it breaches barriers in our understanding of what a currency is,” said Professor Rushman.

“It is certainly tainted by some speculation that it is used by the criminal underworld, but it is hard to find any evidence that criminals use it more than any other currency.

“Bitcoin needs to work harder on explaining its philosophy and on regulation, they need to do a bit of a charm offensive with the regulators and make them comfortable with it while being true to their principles.”

He added: “I think Bitcoin or something like it has a real place in the future. Imagine a world where foreign exchange and monetary policy doesn’t exist, and there is no inflation. Society would be free to use all the talent currently directed to these issues elsewhere. Meanwhile, Governments could still raise taxes and borrow but without uncertainty as to the unit of account.

“That seems far-fetched at the moment, but in an ideal world it could happen. Bitcoin is just another medium of exchange. In the same way that the Euro crosses national boundaries and greatly simplifies real trade in continental Europe, cyber currencies like Bitcoin can do the same globally, without the need for a central bank.”