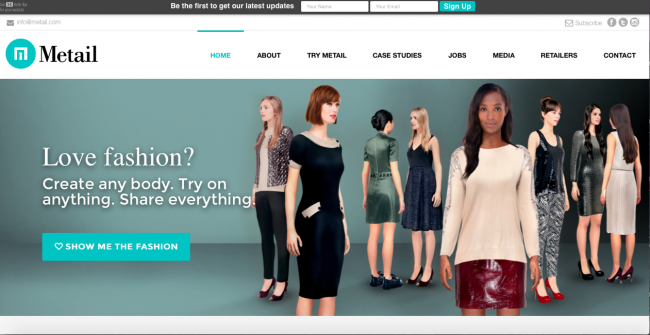 Following a trial last year with Dafiti, which is owned by global e-commerce incubator Rocket Internet, a long term contract to utilise Metail’s technology on over 7000 garments has been agreed. The products available include the ‘Dafiti Collection’, a new line fronted by Brazilian super model Alessandra Ambrosia. For the first time, users will be able to virtually try on a selection of the garments worn by the model.

The trial confirmed that customers using Metail were found to spend 3.5 times longer on the site, than those who did not use the Metail technology. The overall benefit to Dafiti was a 30 per cent increase in sales from the customers who used Metail as opposed to those who did not.

Dafiti’s Ben Bommert, Director of Special Operations said: “The hypothesis that Metail influences customers to buy more is proven; we have established that customers using MeModels on our site buy more products than customers who don’t use the technology.”

Metail CEO, Tom Adeyoola added: “Metail’s technology has delivered what we set out to achieve – consumers have greater confidence to shop online: they return to shop more often, spend more time on site and buy more. We look forward to our new relationship with Dafiti – helping them build a more loyal and valuable user base.”

Replicating this in Asia

With the Asia-Pacific region dominating B2C e-commerce sales on a global scale and set to generate £681 billion in sales in 20151, Metail believes there is significant opportunity to replicate its success for Dafiti with online retailers across Asia.

E-commerce sales for Asia-Pacific are expected to reach £1 trillion by 2017. As one of Asia’s most affluent and well connected countries, boasting a strong telecoms infrastructure and technology literate population, Singapore looks well-placed to benefit from such growth.

Adeyoola continued, “Metail was set up from the start to be a business that could scale globally and work with mass market high volume retailers. We now have the conclusive proof of positive disruptive change to fashion shopping online and we’re very excited at the prospect of replicating such success within the Asian e-commerce market and beyond.”

Metail’s technology allows the user to create a three dimensional model of themselves and virtually try on a range of fashion garments. After entering a few simple measurements, consumers can generate a ‘MeModel’, which is 94-96 per cent accurate to their specific size. The technology can be incorporated into any e-commerce platform and the company is able to photograph and digitise over 200 garments a day, facilitating work with mass market high volume retailers.