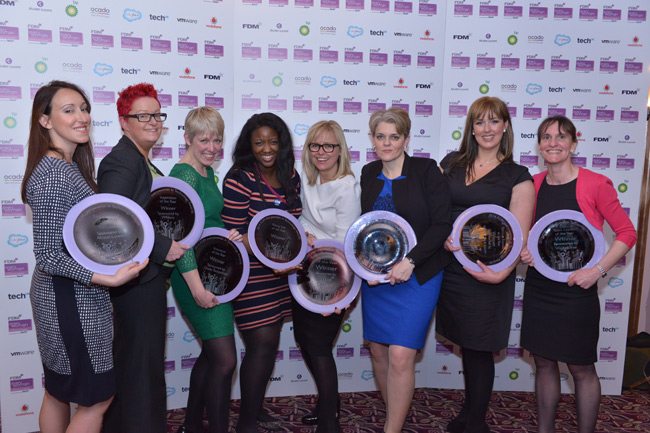 The achievements of this year’s winners demonstrate that the tech sector offers great career opportunities for women possessing a wide range of talents and attributes. They are all role models who will encourage and inspire more women into a sector that both challenges and rewards in equal measure.

everywoman launched this programme four years ago to help address the industry challenge of attracting and retaining more female talent, recognising that uncovering more role models, of all ages, working across industries, plays a critical role in addressing this inbalance. It is imperative that young women and girls see people achieving success in the tech sector that inspire them, women they can aspire to. Today’s winners, whether entrepreneurs, rising stars or leaders in FTSE 100 companies, innovators or engineers are those women.

Research released in January 2014* found the tech sector to be thriving with almost 44% of UK tech firms planning to hire more staff over the year ahead. The government has indicated its desire for the UK to be a leader in the field of technology and by celebrating the achievements of today’s award winners, the industry takes a positive step in communicating the opportunities within this fast paced, ever changing industry.

On the morning of the Awards everywoman hosted a Roundtable discussion with senior leaders and influencers of global technology organisations to discuss initiatives that attract and retain female talent, looking at successes that have been achieved within organisations in order to build a best practice solution.

The winners in the 2014 FDM everywoman in Technology Awards are:

Woman of the Year – sponsored by FDM Group

Entrepreneur of the Year – sponsored by Alcatel-Lucent
· Alicia Navarro, CEO and Co-founder, Skimlinks, from London

In addition, a special Lifetime Achievement Award, was presented – to one of world’s leading computer scientists and one of the most influential woman in UK IT – Professor Dame Wendy Hall. This Award recognised her as an extraordinary role model, through her incredible work within the industry, her pioneering spirit and her passionate championing of women in IT.

Maxine Benson MBE, Co-Founder of everywoman comments, “With 44% of Technology CEOs expected to increase headcount in contrast to 23% across all industries**, it is imperative that more women enter the sector. The organisations involved in today’s Awards are the forward-thinking companies that are already committed to that and the women we are celebrating are role models whose stories and achievements will open the eyes of more young girls to realise that studying STEM subjects can lead to an exciting, rewarding career.”

Sheila Flavell, Chief Operating Officer and Founder Director of Title Sponsor FDM Group states: “We are thrilled to be able to partner with everywoman once again and to support them in their mission to encourage more women into IT careers. FDM is fully committed to helping more women further their careers within this rewarding and creative industry and opening the pipeline for future talent. With an increasing need for IT skills throughout the UK across all sectors, it is vital that we make technology female friendly and actively encourage women to pursue IT as a career path.”

Julian David, CEO of techUK adds: “techUK is delighted to support the 2014 FDM everywoman in Technology Awards. One of the biggest challenges for the UK tech sector is attracting appropriately skilled employees. We need a greater representation of the working population to join UK tech companies and help support the continued growth of the sector. In particular, we need to work hard to attract smart, skilled women who are not currently attracted to the sector and communicate the career opportunities in tech that are open to all. techUK will remain focused on attracting great women to the sector, retaining them and helping them to flourish and succeed.”