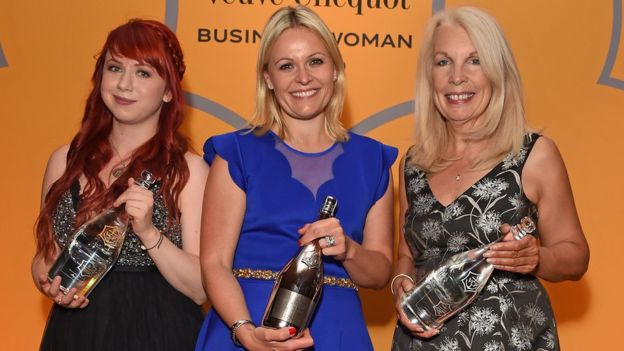 Liv Garfield, CEO, Severn Trent has been announced as the winner of the 2018 Veuve Clicquot Business Woman Award.

As the recipient of the longest-standing award for women in business globally, Liv follows in the footsteps of some of the most outstanding female business leaders – from Anita Roddick, Founder of the Body Shop to leading architect Dame Zaha Hadid CBE.

Since 1972, the awards have honoured women impacting different aspects of business today and celebrates those who share the same qualities as Madame Clicquot, an original trailblazer: her enterprising spirit, her courage and the determination necessary to accomplish her business goals.

Another campaigner for equality is the winner of the Veuve Clicquot New Generation Award, Stephanie Alys. As Founder and Chief Pleasure Officer of MysteryVibe, Stephanie has created an entire category by bringing the world of sextech to the masses with her first product, Crescendo.

The judging panel outlined Liv’s strong customer-focused approach and business acumen as two reasons as to why she won the award. Since taking the role in 2014, Liv has shepherded strong growth for the water company. Not only is it strongly outperforming the rest of the sector, she has also helped forge a customer-focused culture in the company, reflected in its outperforming challenging targets set by customers themselves. However, it was this commitment to customers combined with a responsible business that made her stand out.

In Liv’s words, she is a “working mum of two kids” and through her focus on championing diversity, inclusion and engagement she has become a strong voice in a number of areas that are often ignored, such as menopause-specific training and support for those with terminal illness.

She has ensured that Severn Trent was named in the first-ever Social Mobility Employer Index, the only water company to be included. This is alongside Severn Trent’s mean gender pay reporting of 2.4%.

On receiving the award, Liv Garfield commented: “This is an incredible honour, not only because I remember taking a huge amount of inspiration from some of the previous winners of this award but also because of the awesome story of Madame Clicquot herself, who was a strong role model at a time when women in business were almost unheard of. I truly am delighted but also a little humbled – I know I wouldn’t have been able to win this award without the help and support of absolutely everyone at Severn Trent who works to keep customers’ water flowing every second of every day, so this is as much a win for them as it is for me.”

Amanda is the first female CEO of the BFI; she embodies the core values of the Veuve Clicquot Social Purpose Award, having made a tangible social impact in her sector whilst maintaining strong leadership and business acumen.

The judging panel noted that Amanda has transformed the BFI into an organisation that is not only thriving but one that embraces the next generation of film audiences and talent. Under her leadership, BFI Southbank is one of London’s coolest arts venues, with it’s BFI London Film Festival is one of the most significant in the world. She’s also enabled access to the BFI National Archive to be unlocked for more people to enjoy through the launch of the BFI Player.

Judges were impressed with how Amanda has led the BFI’s commitment to supporting future talent pipelines, particularly in establishing the BFI Film Academy. Now in its 6th year, the BFI Film Academy has provided 15-19 year olds from all over the UK, from all sorts of backgrounds, with training and access to jobs in the film industry, including a pioneering programme with Lucasfilm for 28 trainees to work on the next Star Wars film – Solo: A Star Wars Story.

Amanda is committed to improving equality in the film industry and earlier this year added new guidelines and principles to the BFI’s pioneering Diversity Standards to tackle harassment and bullying in the sector – a move which has seen significant support from many high profile actors including Emma Watson, Ruth Wilson and Gemma Arterton.

Amanda Nevill CBE said: “A huge thank you to Veuve Clicquot for this incredible honour, made even more special by the extraordinary legacy of Madame Clicquot. Championing women’s achievements is vital if we are to change and I am humbled by the achievements and talents of the other winners and nominees. Today, film is the most compelling and easily understood way we have to share our stories that can change the world, so it is vital that everyone, regardless of background, can easily find their way into this storytelling industry. I applaud the brilliance of my colleagues (who really deserve this award more than me) for harnessing the power of storytelling to make change.”

Stephanie is on a worldwide mission to close the pleasure gap by bringing equality to sex. Through her business, MysteryVibe, she is leading a revolution in sextech. Demonstrating the same characteristics of Madame Clicquot from over 200 years ago, Stephanie is breaking down barriers and social taboos.

Coming from a background in management consulting, Stephanie identified a gap in the market to create greater innovation around sex. MysteryVibe was created to answer a lack of development in this area, particularly when it came to women’s pleasure. Today, MysteryVibe creates and builds luxury pleasure products, including the award-winning Crescendo, the world’s first flexible smart toy that is used by people of all genders and orientations in 58 countries.

The judging panel identified Stephanie’s transition from an industry outside to being seen as the first point of call on all things sextech – a movement focused on a technological and cultural shift that will define sex and intimacy. As a result of her work, she is empowering women and having a huge impact on people’s self-worth, relationships and intimacy.

Stephanie has demonstrated huge success with her business already, with customers in 57 countries and in-store retailers across 17 countries. With innovative design and packaging, Stephanie is changing perceptions about where pleasure products are sold, with the Crescendo stocked in mainstream retail points such as airports and pharmacies.

Stephanie Alys on receiving her award said: “I’m delighted to receive this award in the spirit of Madame Clicquot – who applied innovative thinking, audacity and sheer determination to revolutionise an industry. When we founded MysteryVibe, my goal was to change the way society thought about women and sexuality. In the past year, we’ve seen just how much work there is still to be done. When we talk about pleasure, we also talk about consent, and equality. I thank Veuve Clicquot for recognising the importance of these conversations, for helping to push them forward, and for acknowledging the vast potential of sextech.”

Emily Forbes, Founder, Seenit, was announced as the runner-up for the Veuve Clicquot New Generation Award.

Julie Nollet, Marketing & Communication Director, Moët Hennessy UK, commented: “Every one of our three winners this year exhibits many of the core values that Madame Clicquot had when she began her journey into business. Whether it’s Liv’s leadership, Amanda’s social impact or Stephanie’s challenging of the status quo, these are the attributes that Madame Clicquot maintained as one of the world’s first female entrepreneurs. Each woman comes from a diverse sector but what unites them is their commitment to empowering women. That is our core mission for the Veuve Clicquot Business Woman Awards and why we continue to celebrate them today.”