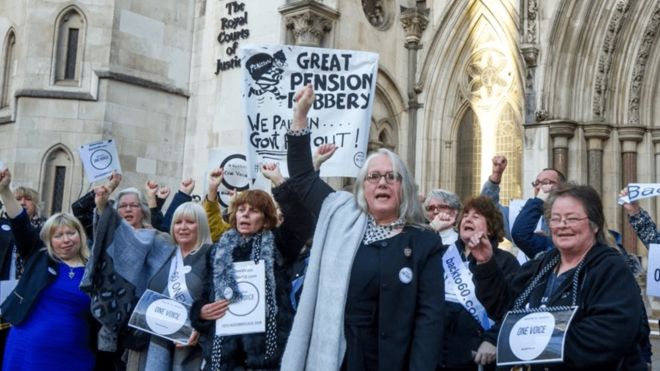 Campaigners will head to the High Court on Wednesday for a judicial review into how the government raised the retirement age for women.

Women born in the 1950s claim the rise is unfair because they were not given enough time to make adjustments to cope with years without a state pension.

The retirement age for women has increased from 60 to 65, in line with men.

The government said the rise had been “clearly communicated”.

A spokesperson for the Department for Work and Pensions said: “The government decided more than 20 years ago that it was going to make the state pension age the same for men and women as a long-overdue move towards gender equality, and this has been clearly communicated.”

Backto60, the group which brought the judicial review, is seeking repayment of all the pensions people born in the 1950s would have received if they had been able to retire earlier.

It argues that the speed of the change and what it calls the lack of warnings has disadvantaged millions of women.

However, the government has ruled this out in the past, claiming that it would cost more than £70bn.

Up until 2010, women received their state pensions at the age of 60 but that has been rising since then.

The retirement age of both men and women will increase steadily to 67 by 2028.

While most campaigners support pension age equality, they are claiming sex discrimination in Wednesday’s judicial review.

They argue that the lack of notice and the speed of the change have resulted in women being disadvantaged.

Campaign group Women against State Pension Inequality (WASPI) says it is not against equalisation: “But we do not accept the unfair way the changes to our state pension age were implemented with inadequate or no notice.”