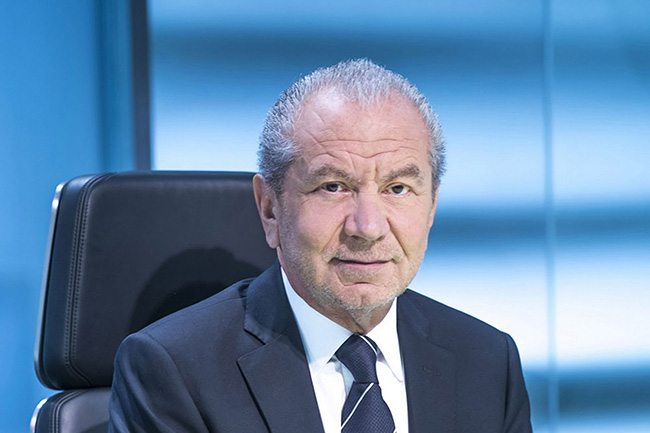 The Apprentice star will tour Britain with a roadshow aimed at promoting enterprise and encouraging businesses to take on apprentices.

Lord Sugar said he was eager to encourage youngsters to take on the training roles or to create their own businesses as an alternative to going to university.

He was first brought into Government when Mr Brown made him a Labour peer as part of the former prime minister’s ambition to create a ‘government of all the talents’.

But his relationship with Labour soured under Mr Miliband and he resigned in disgust at the left-wing, anti-business platform pursued ahead of the 2015 general election.

Lord Sugar said today: ‘I’m delighted to be taking on this challenge.

‘I built successful businesses with the support of hundreds of talented young people who learned their skills on the job – exactly the kinds of skills you learn in an apprenticeship.

‘But not enough of our young people know about apprenticeships and what they offer, and too few feel empowered to set up their own business.

‘I’ll be travelling the length and breadth of this country to tell young people why apprenticeships are a great way for them to build their skills – and talking about the opportunities for starting their own business, hopefully instilling some entrepreneurial spirit.’

Skills Minister Nick Boles said: ‘We want every young person in Britain to get on and build a great life for themselves, whether it’s by starting an apprenticeship or setting up their own business.
‘Lord Sugar has huge credibility among young people and I am delighted that he has agreed to help the government bang the drum for apprenticeships and enterprise.’

Lord Sugar quit Labour last year after admitting he had ‘lost confidence’ in the party under Mr Miliband because of ‘negative business policies and the general anti-enterprise concepts’ under consideration.

In his resignation letter, he said: ‘I was originally brought into the party by Gordon Brown during an era where true enterprise was being supported by the party.

‘I signed onto New Labour in 1997 but more recently, particularly in relation to business, I sensed a policy shift back towards what Old Labour stood for.’

Since his resignation, Lord Sugar has sat in the House of Lords as an ‘unaffiliated’ peer who is not attached to any group.

Commenting on the announcement, IPSE, the Association of Independent Professionals and the Self Employed, Director of Policy Simon McVicker said: “Lord Sugar’s experience in starting up his own business, as well as his outstanding reputation as one of the UK’s leading entrepreneurs, makes him a credible choice to promote enterprise in young people.

“We’re pleased to see a Government drive to encourage more young people to start up their own businesses. The success of this initiative will rest upon concrete action which can enable them to get their businesses off the ground.

“Too often schools, colleges and universities focus on progression to full-time employment, with little focus on freelancing as a viable career option. This is despite the rapid growth in young freelancers – an increase of over 50 per cent since 2008.

“Schools and further education providers must integrate enterprise and freelancing throughout the curriculum, as well as the provision of sufficient support and mentoring once freelance businesses are off the ground.