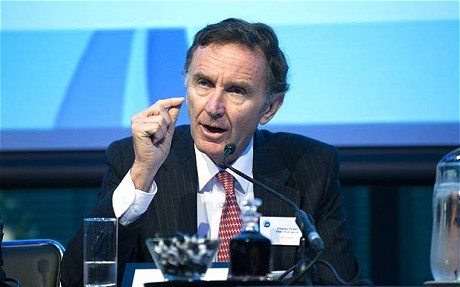 Speaking on Sky News, the Trade and Investment Minister reiterated his regret about the billions of dollars the bank handled on behalf of drug cartels but defended his record in dealing with the crisis reports The Telegraph.

“I reacted appropriately when issues came up,” he said. “I do not believe that I have a case to answer other than in the important sense that as chairman and chief executive I was responsible for what the company did. HSBC has expressed regret for the failures. I share that regret.”

He also said he had not considered resigning over the scandal, adding that he was “very engaged” with his current job.

Lord Green has been under sustained pressure to explain what he knew and when about the money laundering uncovered by US authorities. The bank was criticised by a Senate report last week and now faces substantial fines from US regulators.
His defence of his record came as the bank was fined $27.5m (£17.7m) by Mexican authorities over the failures in regard to money laundering controls.

In a statement the bank said the fine was “imposed by the National Banking and Securities Commission … in connection with non-compliance with anti-money laundering systems and controls, including reporting requirements with regard to unusual transactions, as well as other prudential regulations”.

The fine was in relation to the failure to report 39 unusual transactions, 21 administrative failures and the late reporting of 1,729 unusual transactions.
The bank apologised for “its failure strictly to comply with banking regulations”. It also acknowledged that it had “failed to meet the standards that regulators and customers expect”.

Since the problems emerged the bank has implemented a number of measures designed to stop money laundering. These include stopping Mexican branches from dealing in cash deposits of US dollars, strengthening internal controls, improving reporting and closing accounts where insufficient information is known about the customer.