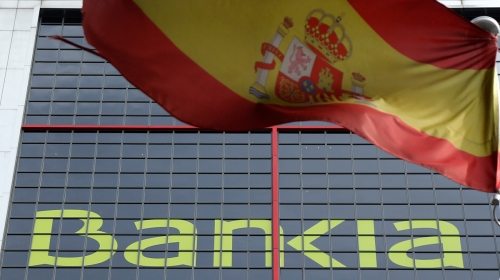 The relief may be short-lived though, as investors look forward to a Greek national election on June 17 that could put Athens on a path out of the bloc and precipitate a deeper crisis over the future of the euro reports The Telegraph.

US Treasury bond futures tumbled in Asia, reflecting the switch out of so-called safe haven assets to riskier ones. The 30-year contract was off 1-11/32 at 147-26/32.

“It was macroeconomics that lifted the markets this morning, as the EU stepped in to help Spain’s banks,” said Orient Futures Derivatives department director Andy Du. “All eyes are still on Greece’s upcoming elections but investors’ worries over the eurozone has eased in the short term.”

The 17-nation euro currency area agreed to lend Madrid up to €100bn (£81bn) for its bank rescue fund, more than an initial audit suggested it might need. No precise amount was set because Spain said it needed time for an independent assessment of the capital needs of its banking sector, which is due to be delivered in less than two weeks.

The rescue for Spain’s banks follows bailouts for Greece, Ireland and Portugal since 2010, and comes a week before a crucial election in Greece that could determine whether Athens will stay with the euro bloc.

Analysts expect investors’ appetite to buy stocks, commodities and other riskier assets to remain limited by the eurozone’s broader problems. Its challenge of reducing high sovereign debts and pursuing fiscal austerity, while also achieving growth, will not be resolved anytime soon.

The European Union action is going to be a temporary success because the Spanish crisis is mostly centred around its banks, said Richard Hastings, macro and consumer strategist at Global Hunter Securities.

“The next phase of the Spain situation comes in six to nine more months when it becomes clear that Spain’s economy has not improved, thus pointing to a wider realm of distress,” Hastings said.

“That is indeed the primary concern for the entire European situation: that the relationship between banking, credit and growth remains fragmented and impaired.”

Analysts said Monday’s market rebound was probably more to do with short covering than a return to full risk taking, especially in the euro, given the record positions that had built up betting on a decline in its value.

“But uncertainties remain with how funds are provided to Spanish banks, as well as the outcome of Greece’s election and the situation in peripherals such as Italy. I see the recovery in currencies, especially the euro, largely as an unwinding of huge short positions,” he said.

Hattori said the next key gauge for confidence was whether the spread between Italian government bond yields and those of Germany would exceed 500 basis points.

While the public financing situation in Spain and Italy is not as dire as that in the three smaller countries that have already sought international help, Italy may be wary of the banking crisis in Spain reigniting concerns about its huge public debts, he said.