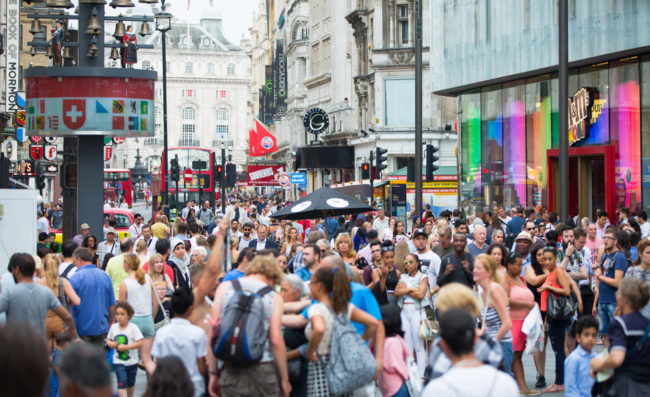 Footfall across UK high streets over the Easter weekend was higher this year than it was in 2016, thanks to the mild weather and a weaker pound luring bargain-hunting overseas tourists, reports The Independent.

“The results to date are in part due to the shift in weather compared to last year; Good Friday was exceptionally warm and sunny – better than this year – but windy and rainy for the rest of the weekend, compared to this year’s sunny and mild weather,” said Diane Wehrle of Springboard.

Ms Wehrle said that spending underscored a trend for increased footfall outside of retail hours, which indicates that food and drink outlets are a key driver of shopper footfall in the current economic environment.

“This is believed to be a consequence of the worsening of consumer confidence and inflation, which has led to more conservative shopper spending on retail goods and their increased preference for spending on experiences,” she said.

Kyle Monk, head of insights at New West End Company, a retail consultancy that represents the shopping hot spots of Bond Street, Oxford Street and Regent Street, said that the West End of London experienced a particular uptick in footfall which he says was likely driven by “currency advantages”.

A fall in the value of the pound against the dollar, the euro and a slew of other currencies since Britain’s vote to the leave the EU means that shoppers from abroad effectively have more spending power.

Citing data from PCA Predict, Springboard said that online transactions increased by 12.4 per cent on Good Friday compared with last year, offsetting a decline of 4.4 per cent on Easter Saturday.

Mobile transactions particularly fuelled online purchases, thanks to a 9.9 per cent rise in transactions. Transactions completed on PC declined 12.7 per cent, year-on-year.