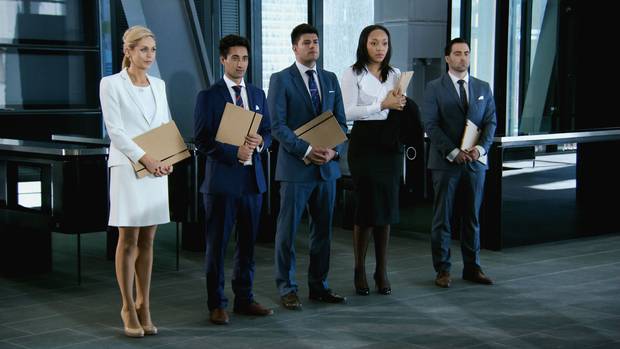 Sometimes you just lose the will to live and tonight was one of those nights. Obviously the four advisors – Mike (publishing guru), Claudine (media agency), Claude (global trouble shooter) and Ricky (a previous Apprentice winner) – were here to give the business plans a virtual kicking, however, at this stage in the competition, I (naively) didn’t expect it to be deserved. So, where to start?

Oh Solomon. What a lovely chap, but it seems he’s not perfect. Described by Claudine as an excitable puppy, he was, sadly, just that. His business plan really beggared belief. Not his business idea, which was a logistics company for university students that wanted to start their own businesses but didn’t have the time/inclination/talent to deal with the storing, packing and shipping of their goods. The idea was one of Solomon’s many good ideas, and both Solomon the person and Solomon’s ideas were generally loved.

Claude said Solomon’s application “filled him with pleasure”, told him he was “enterprising” and noted “he’d never put so many ticks by anyone” in all of his 10 Apprentice years. But then came the business plan. As Mike put it, it was eight pages long and half of it was pictures. Claude went a step further calling it a “bloody disgrace” and told Solomon to leave because he was “taking the piss”.

In one way I was gutted for Solomon, and then I remembered he was 23. His age seemed to be used as an excuse for not understanding that a business plan for ¼ million pounds had to be more detailed that your average University essay, but I wasn’t buying it. Solomon might be an immature 23 (not my words, a phrase from the boardroom), but still, as the aspiring, intelligent entrepreneur he is, he could have Googled ‘business plan’ and helped himself.

Then there was Roisin, no experience of running a business but amazingly successful in her chosen profession and willing to give it all up to go into the readymade meal business. And I was so disappointed. Challenged by Claudine about her lack of business experience, you can only assume that she panicked as her response was that she didn’t have any experience, but that she did eat food… 12 hours on I’m still not sure what to say about that comment.

Then she was questioned about the market for her food, to which Roisin responded she had undertaken market research. Unfortunately, her ‘market research’ had consisted of a focus group of just six people and some conversations with family and friends! Then things got worse. Claude quizzed accomplished accountant Roisin on her financials and we discovered that she’d use up the £250k in two months and planned to borrow £500k from a bank, a scenario that was only workable on Planet Roisin.

Mike put the final nail in the coffin by telling her that her unique ingredient wasn’t unique at all and that it was (apparently) easily available in ready meal form. She didn’t cry, but I think we might have forgiven her if she did after having to watch her hopes crumble before her eyes, and the nation’s.

By now Claude was on a roll and Daniel was the next target. Daniel wanted to add to his successful business by running an online events planner. Claude called Daniel’s business plan “significantly flawed” and “ridiculous” and noted that no-one is “going to entrust their wedding to a website”. Claudine at least gave downtrodden Daniel something to hold on to, congratulating him on being a changed person, thanks to The Apprentice experience.

Then a ray of hope appeared in the form of Bianca. With tights and shapewear in shades to suit all skin types, Mike said he thought Bianca “was really onto something”. Claudine – as happens with many women I find – decided to indicate that Bianca was too professional by accusing her of hiding behind a mask. Why if you’re pitching to run a business, you have to disclose all of your personal traits I don’t know, and it leads me to wonder if the same question would have been asked if she was a man?

The Apprentice team obviously decided they were going to make Bianca appear a more rounded character because just being a “very impressive woman” (Claudine) was not enough. So previous Apprentice winner Ricky decided take a punt on the personality train too and, sadly, it worked. Feeling personally attacked, Bianca broke down, no doubt to the delight of the editing team. I was gutted for Bianca, although I bet she was more upset with herself than anyone else could ever be.

It was Mark’s turn for the torture next, although part way through, and perhaps a touch too early, he declared he was “enjoying it”. His business proposal, a digital marketing company that helps SMEs to generate leads, was an extension of his current specialism. Claude couldn’t quite work up the fervour for Mark’s plans as he had with others and settled for calling his plan “bland” and “standard” but counteracted his comments with praise for Mark’s answers to his questions. Ricky challenged Mark and asked him to role play, which didn’t go particularly well, highlighting how uncomfortable he was with ‘improv’ and the lack of formal qualifications he had.

At the end of all of this drama, it was finally time to get back into the Boardroom to find out who would make it through to the final. Lord Sugar conceded that it was a great achievement to get to the 11th week, before he began his personal ‘critique’ of the candidates’ business plans. But in the end, I’m pretty sure his decisions didn’t come as a surprise to the Apprentice audience. Solomon was fired, followed by Roisin, and then after dragging out the wait for the final three, Daniel was next. All that’s to be done now is to see who wins between Bianca and Mark. My money’s firmly on Bianca.