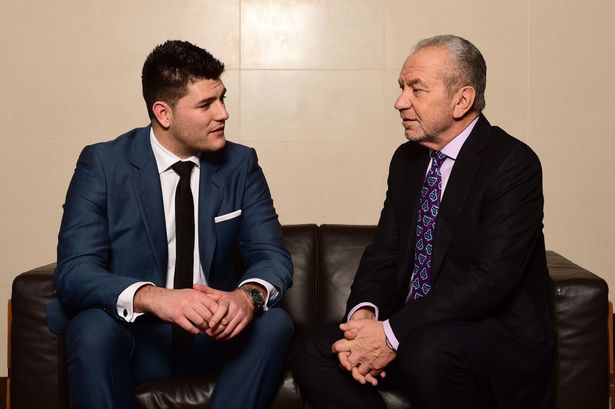 The last task was for Mark and Bianca to launch their businesses to an audience of experts. Sugar outlined that during the three day task, they’d have to research their market, design their brand and come up with a promotional video. As Sugar put it, it’s a lot to do, so he’d arranged some help… cue eight of the previous Apprentices walking in.

Flipping a coin to decide who could go first in choosing their teams, Bianca won. Like picking players for a sports team, Bianca and Mark narrowed the field. Bianca settling on Katie, Felipe, Lauren and Daniel, with Mark’s contingent being Solomon, Sanjay, James and Sarah.

Outlining their business plans to their teams, Bianca revealed she expected people to pay £35 for a pair of tights and got a pledge from Daniel that said, “You got me fired but I hate Mark more and I’ve still got a chance to beat Mark” so he was behind her all the way. Mark’s online digital marketing agency for SMEs seemed to cause less in-team discussion. Settling on names, Bianca’s product was now called True Skin, and Mark’s, Climb Online. And off the teams went to explore the business concepts a little more.

For anyone who owns an SME, it came as no surprise that Mark’s digital marketing industry was saturated or that Mark’s challenge would be differentiation. For Bianca’s team, finding out what’s hot in hosiery was more of a challenge. Bianca met with the MD of a premium brand tight retailer and outlined her plans for 30 different colours from pale to sub Saharan African. Bianca also came away with the knowledge that her price point was too high and decided to drop it from £35 to nearer £20.

By the end of day one both businesses had decided on their branding and they were ready to crack on with day two’s video development. After the videos the Apprentice teams made in the New York task, I was more than a bit curious – and sceptical – about the results but as it turned out, apart from being a little cheesy, the teams didn’t do a bad job – or in Mark’s case Sanjay, who edited the whole thing on his own. Bianca was in control of her video production, alongside Katie, and sent Lauren, Felipe and Daniel packing before they had a chance to so much as view the initial results.

Day three and the launch was soon upon them and Mark’s preparation seemed sketchy at best and I could feel the nation praying he didn’t have another ‘Tesco fiasco’ (his words). Mark also chose to leave James and Solomon in charge of the entertainment for the launch, which could have been Mark’s most risky decision of the series. Not known for their subtly or maturity, and with the entertainers dressed in all in one Lycra outfits, it all could have gone horribly wrong, but somehow it didn’t.

Bianca was prepared and delivered a confident presentation, alongside some leggy models, showcasing her tights and answered the audience’s questions, on the number of products and the price point, well. When Mark got up to speak, there was throat clearing and I waited on the edge of my sofa seat to see if he would buckle under pressure. Thank goodness he didn’t and he seemed to impress the audience with his industry knowledge and approach to hard graft.

Back in the boardroom Sugar dragged out the experience for the viewers, first by summarising the two businesses, then by asking them to tell him why they should be his business partner and finally asking for Nick and Karren’s input. But in the end Sugar, to my surprise, chose Mark and his “new world business” (Sugar) over and above Bianca’s SME experience and “good idea”. So in the end it was the Australian 24 year old that won the UK’s Apprentice, but Bianca is still launching her tights without the business guru, and maybe that will turn out to be the best decision for her – all of that profile and none of the ties to and demands of Lord Sugar. I just hope Mark is happy with his win and gets the results he craves.

The final of the Apprentice seemed a little anti-climactic to me, although I’m not sure what I was expecting. So we look forward to an eleventh series, although it looks like it will be without Nick, so watch this space.