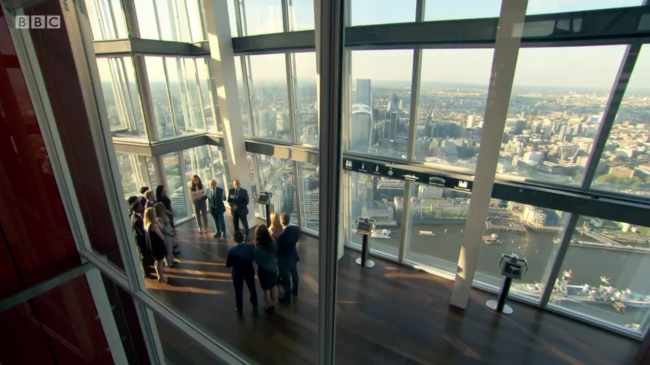 2:30pm – not the usual ridiculously early wake up call time for the candidates to be notified of their meeting place.

Disrupting their day of rest and relaxation, the candidates had 20 minutes to get ready to take a visit to the 69th floor of the UK’s tallest building, The Shard.

After Lord Sugar proclaimed London to be one of the most multi-cultural places in the world, he gave them a ‘shopping list’ of items known from different cultures. Candidates had £1000 to get the items at the lowest prices possible from places within London, meaning they also would have to work the night shift, returning to The Shard at 6am the following morning.

This task was not only set to test the candidates’ negotiation skills, but also how well they knew London.

As the teams quickly got underway, for Nebula, Trishna put herself forward as project manager which everyone seemed content with. Rebecca seemed to sit back and watch, despite knowing that she said she would project manage the next task and needed to prove herself to Lord Sugar. She could have at least given it a go, even though she was bound to say this wasn’t her strongest point but at least it would have showed effort.

Trishna’s strategy seemed sensible – splitting the team in half, one going to East London and one going to West London. Team Nebula appeared to have had a good knowledge of London which was bound to work in their favour for this London-based task.

Meanwhile on team Titans, Courtney was appointed the project manager. After hearing the post code SE2 for one of the item locations, Courtney was confident that it was just by London bridge – how wrong was he?! Stuck in the car locating to somewhere much further than they had imagined was wasting a lot of their precious time.

Paul claimed to know East London well for team Nebula, and so he directed them to the well known Beigel shop in Brick Lane to get 200 rainbow doughnuts at a price of 35p each – speedy and a good deal.

While the other team were on their way to the West side of London, Trishna found that Sofiane needed to be tamed. There were numerous times where he would try to do his own thing, which we’ve seen in too many previous tasks too – he is definitely not a real team player.

Karthik had an interesting strategy when trying to buy cheap another item on the list – a lehenga. He simply said to shop owners that this was him “asking a favour”. His technique failed and a different approach in a shop across the road seemed to work and he bagged himself a £55 lehenga as a result- not the best price but certainly not the worst.

Nebula’s sub team, managed by Paul, were on their way to Streatham after a call made by Rebecca confirmed that they were able to get both items, tagine and African black soap from one place. However, a miscommunication over the phone seemed to turn ‘tagine’ into ‘tahini’ and ‘soap’ into ‘soup’ – what a waste of time. Also, by Rebecca managing this particular call, it didn’t leave her in good light of the task as driving all the way to the South-West killed too much of their valuable time.

Alana made a fairly good deal on the cigars but Karren described her approach for being a “pathetic female” and not the way she would have negotiated, but Alana still got the price down, so you have to commend her for that.

Jessica wasn’t much better in getting the  cigars for team Nebula as she tried to make the supplier feel guilty with a story that she was getting the cigars for her dad – not very professional. She ended up paying a high price, despite Trishna’s plan to walk out and move on if this were to happen.

While team Nebula were quite frantic, Courtney’s approach in team Titans was definitely more laid back, Karren stating him for having “no sense of urgency”, which didn’t seem to stop them getting back to The Shard for 6am.

Unfortunately, half of team Nebula were late – the half which included the project manager, which didn’t really set a great example.

As the positives and negatives of the task were discussed between Lord Sugar and the teams, I couldn’t help but notice the unimpressed attitude that Karren portrayed, chipping in with comments to put the candidates down more frequently than usual.

It seemed blame for downfalls in the task were flown across the room at different candidates and every one had something to own up to in this task, but the end result confirmed the losers.

Titans were once again victorious and went off for a deserved pampering session in the comfort of the candidates’ home.

The bickering in the cafe was let loose between team Nebula, with the finger pointed mainly at Rebecca, Sofiane and Trishna – when of course, Rebecca claimed to not be the reason for the failure of the task.

Returning to the boardroom, it was clear to both, the candidates and Lord Sugar, that team Nebula lacked negotiation skills as a whole. The items they bought were at such a significantly higher price in comparison to team Titans’ items, which literally cost them the success of the task.

As predicted, Trishna brought back Rebecca and Sofiane to the boardroom. Rebecca made her excuses as usual, Sofiane defended his tendency to do his own thing as trying to help the team and Trishna believed she wasn’t fully responsible for the failure of the task.

As each candidate fought for their place in the process, Sugar said he was “concerned” about Sofiane in the way he acts. At one point, he lead us to believe that Trishna was going to be fired as he put the total blame on her for the failure of the task. However, the finger was pointed and Rebecca was finally fired.