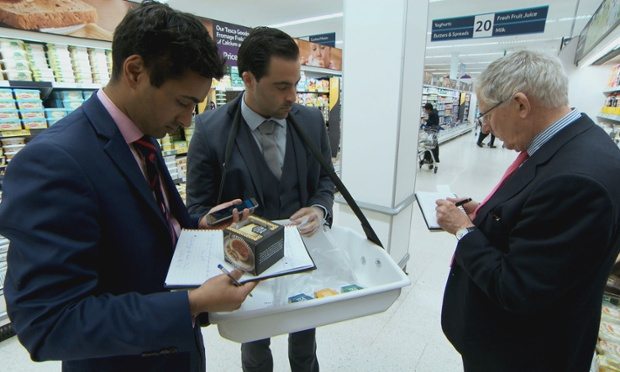 Giving a team a taster of what’s to come next week, Sugar decided there’d be no more Mr Nice Guy, and given that Mr Guy hadn’t been particularly nice so far, this was bad news for the competitors.

With seven candidates left, this week’s task was to create a range of premium puddings aimed at the mass market and to pitch to three major retailers, with the team that took the most orders winning. Sugar decided to change the teams around too and Sanjay moved to Tenacity and Daniel jumped over to Summit.

Sugar also decided to appoint the project managers, and we got a sneaky peak at the food-related businesses they were proposing to Lord Sugar. He chose fitness entrepreneur Katie as PM for Tenacity, as she wanted to open a restaurant with him, and Sugar appointed accountant Roisin as PM to Summit as she aspires to develop a ready meal business.

With two days to complete the task, the teams set about deciding on the product, as well as who was going to develop the tastes and ingredients and who was going to work on the branding. Tenacity decided to take a chance on developing a range of trifles with unusual extra flavours, to be decided by Katie, and Summit decided to combine cheesecake and types of tea to tempt the mass market’s taste buds.

Tenacity had no trouble allocating tasks, with Katie appointing herself as the manufacturing rep and sending the boys off to do the branding, but in Roisin’s Summit, Solomon and Bianca battled it out for a branding spot. Roisin was easily swayed in the end and Solomon won the war and joined Roisin for the branding job, sending contrasting personalities Bianca and Daniel off to taste tea.

While Tenacity’s Mark and Sanjay thought up some dodgy names for their proposed trifle – Fanciful, Treat Time and Sweet Pleasure (ew!), Summit’s Daniel was most certainly out of his comfort zone tea tasting with Bianca. Finally Tenacity’s twosome settled on A Trifle Different and ‘high fived’ on their (not-so) brilliant branding. Meanwhile Katie had decided on the trifle’s added extras, like super expensive spice saffron.

Summit decided on Tea Pot as a brand with Roisin and Solomon doing a pretty decent job of the cheesecake’s branding too. Although Solomon seemed so over excited about it all he threatened to send the dessert through the post to his girlfriend as a gift it was so good – not sure the dessert, that would require refrigeration of course – would really be the most obvious choice for a postal gift, but was difficult to fault his childlike enthusiasm! Bianca and Daniel returned with their top tea selection that included green tea for the white chocolate dessert and early grey for the lemon cheesecake. And that was the end of day one.

At 8am the next morning the promising puds arrives and both teams were delighted with their desserts and it was off to Asda, Waitrose and Tesco to pitch. The pitches varied from mediocre to reasonable until, after much insistence from Mark, he was put forward to do Tenacity’s pitch to Tesco, and what a disaster. Uncharacteristically, Mark did his best but was blinded by an attack of nerves. From behind the sofa cushions I was cringing and sympathising in equal measure.

But unlike his colleagues in previous tasks, Mark didn’t run from his mistake. As soon as they were out of the pitch room, he apologised and explained what had happened. His team were disappointed, but they’d be harsh people if they didn’t respect him for his honesty. But back in the boardroom, would this pitch have made the difference?

Summit was Sugar’s first target, making a weak joke about chocolate teapots, and then he decided to stir the pudding pot for a while reciting what they had said about each other out of earshot. Yet another disappointing quip followed about football and then finally something of substance came up. Mark raised the issue of his performance saying, “I went in and chopped my bundle.” We all got the idea but I’m guessing this was an Australian phrase! Mark went on to say he got overwhelmed with the situation and was very embarrassed which, amazingly, Sugar didn’t torture him for.

Who’d got the most orders was next and it transpired that Asda liked two of Tenacity’s trifles, ordering 13,500 and Waitrose liked Summit’s cheesecakes ordering 5,500. However, Tesco tipped the scales firmly in favour of Summit with an order of 20,000 Tea Pot desserts, and off went a successful Summit to sip Martinis on a yacht from a James Bond film.

Toughing it out in the boardroom was Tenacity. After some infighting when questioned about their business plans, finally Sugar decided two candidates had to go. Of Katie he said, “You are Miss Common Sense and a good organisers but I can’t see your business working” and “You’re an intelligent fellow but I don’t have confidence in your website business,” he said to Sanjay.

Sugar told Mark it was his “last chance,” which seemed a touch harsh given that it was his first time in the boardroom and, suddenly, The Apprentice became serious.

With five candidates left, the semi-finals will be next week where each aspiring entrepreneur will be grilled on their business plan by four of Sugar’s business advisors. Rather them than me.