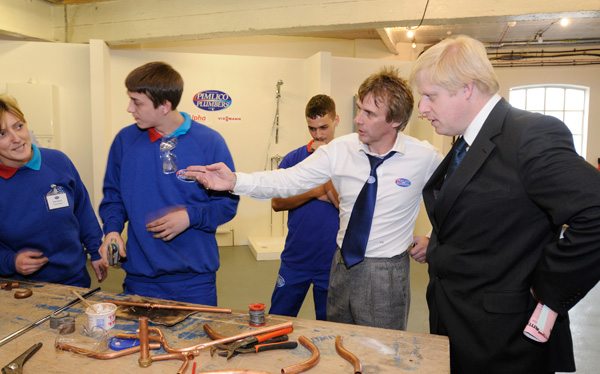 He hit the nail of the head with the two key issues surrounding apprenticeships. Firstly, he highlights the need for apprenticeships to be filled with the highest quality of training to offer serious kudos and tangible value both to apprentices and employers.

And secondly, Doug has made it clear that, like me, he believes that the many training schemes out there labelled as ‘apprenticeships’ are devaluing the core features of what makes a true apprenticeship work.

It is maddening that the definition of the honourable institution of the ‘apprenticeship’ has been completely ripped-off by a combination of self-serving government schemes and cynical hard-nosed manipulation of big business, who have spotted an opportunity to cut their labour costs by converting existing employees to so-called apprentices, or hiring new workers and calling them thus.

Either way, this practice robs the public purse in exactly the same way as using loopholes to avoid paying taxes, and trains nobody in anything useful for the future.

Getting back to the report’s idea that all this immoral behaviour is degrading the idea of an experience-based, long-term, on-the-job-quality career training concept, that until a couple of decades ago was trusted and understood by the public.

It is, of course, a complete ‘no-brainer’ that a few weeks or months don’t make the foundation of a career. These shoddy imitations should be completely banned and anyone continuing to offer them – and that includes private training organisations, with or without government contracts – should be stopped and, in some cases, prosecuted.

Now that might sound stupid and an over-reaction, but I take this issue incredibly seriously. When I began my apprenticeship I was told that if I worked hard and completed it, I would never be out of work for the rest of my life, and that has proved to be true.

We need to protect the term ‘apprenticeship’ and in this day and age that would seem to require a law.

What I’m on about here is the same kind of protection as a Melton Mowbray pork pie, or Camembert cheese.

There is a lot spoken about making job training applicable to the workplace, and there is no better way of doing this than having the employers who need the skilled personnel doing the training of the next generation.

And it goes without saying that you can’t learn a skill and get the required experience to combat virtually any situation in weeks or months . . . apprenticeships need to be measured in years!