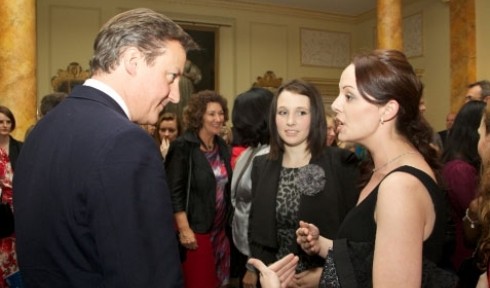 Beware – some serious bragging may be about to take place!

Well, this year, or should I say the last eight weeks have been something of a dream come true! I have managed to tick five of my goals off in quick succession.

September saw me win my first business award as Pitcher House was named one of the Smarta 100 winners. Not only was I thrilled but it meant an overnight trip to London (a whole night off from mummy duties!!) to attend the awards event. I managed to squeeze in a quick visit to The Savoy for a cocktail and meet the fabulous Deborah Meaden all in the same night.

Due to the award winning I treated myself to a pair of stunning, sparkly and very expensive designer shoes – another item on the list scratched off. This may seem like a shallow thing to have on a list of goals but as someone who previously spent no more than £30 per pair of shoes this was HUGE! I am a shoe addict and could definitely give Carrie Bradshaw a run for her money when it comes to quantity but now I’ve begun upping the quality stakes too.

However, the highlight of my year started three weeks ago. I had a call from Amanda (the other half of Mumpreneur UK) who told me we had both been invited to a Reception to Celebrate UK Women in Business at none other than No 10 Downing Street!! Now as a girl who grew up in one of the roughest areas of Birmingham and who was always looked upon as someone who would achieve very little, you can imagine just how excited I became.

I’ve always wanted to walk through that shiny black door and generally have a good old nose at how the other half live and I finally got my chance. Amanda and I were very lucky to have met and spent time chatting with David Cameron, Vince Cable and Theresa May, all of whom I can genuinely say were lovely.

In January 2011 I made a list of goals and by October 2011 I have ticked many of them. There are still some that I’m a long way from achieving and others that I’m on my way to reaching and with my competitive streak I’ll keep pushing until I can put a tick next to each an every one of them.

Having a list of goals keeps me motivated. When I’m having one of those days where I’d rather be browsing through Facebook or nipping out for coffee with friends instead of working, all I have to do is look at my list and it helps me pull through.

The biggest motivator though?? Being able to grab my luminous pink high-lighter and adding an extremely satisfying tick next to each one as I get there.