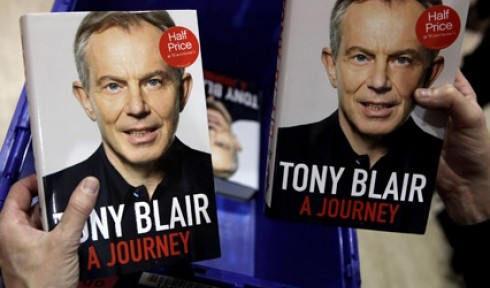 I don’t know what Tony Blair expected when he began his recent book tour, but it probably wasn’t protesters throwing eggs at him.  Blair may be more well-known than many other authors whose books have been released this month, but the mixed feedback on his book proves he is just as vulnerable as every other author.
I think it is childish and cowardly to throw eggs and shoes at someone, especially an author who has taken the time to put their thoughts and ideas together in a book.  And especially an author who has committed to donating all of the proceeds from that book to charity.  But, as I am fond of saying, everyone is entitled to his or her opinion.
I don’t think Tony Blair expected glowing testimonials for his new memoir from the general public.  So he knew there was a risk, but he published the book anyway.
One of the reasons many people hesitate to publish their books is the fear of what readers will think.  Fear of criticism and rejection is a reality for most business people and politicians, and the more senior and more successful they are, the more the fewer risks they tend to take in terms of exposing themselves and their ideas to the market.
You could say there is a greater expectation on them, with the spotlight shining on them, and they have more to lose.
But the bold ones get over it and act despite their fears.  As I wrote in 24 Carat BOLD, “I don’t believe any major breakthroughs could ever happen without at least a little boat-rocking or someone sticking their head above the parapet.”  Ultimately that is why some people become visible leaders and others stay in the shadows.
Blair should be used to criticism by now, as it has followed him around since his latter days as Prime Minister.  In fact, he should get the critiques and feedback about his memoirs in perspective and see the situation for what it really is: people probably have a problem with him, not just his book.  The book is a convenient target this month though.
No matter what Tony Blair says or does, there will be some people that will dislike or even hate him and his ideas.
What are his choices?
To pander to those critics and abstain from speaking his mind or telling his story?  I don’t think so.  To soften his message and make it politically correct, hoping to minimise offence?  Again, not really a good option for a leader.
The only choice for a REAL Thought Leader is to share his or her truth authentically and honestly.  Accept that there will be people who do not agree with you, and possibly even some who violently disagree.  Place your fears to one side and remember the reason why you wanted to share your wisdom in the first place.  Focus on all the people you want to connect to and help.  Find a source of confidence and belief in your own message.  And a good dry cleaners who knows how to remove egg stains.