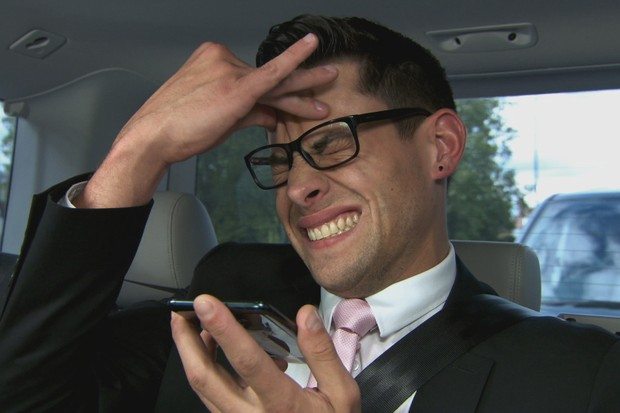 As I sat and watched week four of the Apprentice it became clear why I’d opted out of episodes one, two and three.

I’m not sure why all the men were topless, nor could I believe quite how many hair drying and styling utensils they required; it struck me there were some great [wannabe] contenders for Mr Universe but maybe not so many ‘millionaire moguls in the making’, as the narrator claimed. It didn’t seem to bother the girls though, with Elizabeth announcing she hoped the contest involved rugby so she could ‘get one in a ruck’. First cringe of the evening. Or maybe I’m just miserable; or jealous.

Both teams were certainly looking to score in this Women’s Football Final themed task which had corporate hospitality on the menu. Balancing out the teams by asking Vitality team to choose a girl, Sarah soon stepped on board. As it turns out, Sarah may never know why she was chosen given Andrew’s comment later in the day that Sarah “keeps herself well”. Not dissimilar was his PC-adverse comment that women’s football certainly wasn’t as good as men’s football, something Sugar mentioned in the Boardroom two days’ later.

Two tasks were set: One was a box with corporate hospitality for 14 to be sorted out, apparently with entertainment; the second, a stall selling snacks outside the stadium, with of course a combined objective of profiteering as opposed to doing good business – as Siobhan pointed out, not always the same thing when considering running a business and where you might want to see the clients actually return.

The farce that followed was completely unnecessary, personified perfectly by the teams’ visits to the clients. By now we were cranking up the cringe moments, which came in quick succession. Team Vitality seemed to have absolutely no idea how to negotiate with a first offer of £6,100 for the package they’d put together, dropping the price within seconds to £4,800, only narrowly managing to walk away with £2,500 after an accidental offer of £1,700 along the way.

Team Graphene didn’t do any better with Elizabeth announcing that the call to her team to confirm costs didn’t make any sense, yet failing to phone them back to clarify details. So off she, and the rest of the sub team, went to agree something they had no idea about. And agree they did. To everything. All quite scary stuff if these are the UK’s brightest and best.

Graphene decided that high end was what they were delivering and at least managed to co-ordinate timely, and ample, food and drink albeit the alcoholic level of proposed wine consumption left their profits passed out on the floor.

Vitality went for saving money every which way they could, like trying to make eight bottles last six hours with 14 guests! If you do the maths that’s 6000ml of wine, 428mls each, less than two large glasses; I could easily inhale that amount of wine between work and my tube stop, and that’s not my idea of a good night out.

However, this comical cost cutting did lead to a flurry of award-level cringe moments, which included (unsurprisingly) running out of champagne minutes into the reception, serving the pregnant lady tap water as the only exclusive option and roping in poor Harrison to sing Frank Sinatra, because apparently someone heard him in the shower and he didn’t cost £750 like the magician they interviewed. Oh yes, and the one and a half canopies per person must have filled the guests right up.

But perhaps the teams outside were faring better? Well Jade was certainly working some magic for the girls, she smiled, she sold, she conquered candy floss. But back with the (mainly) boys, their stall didn’t go with a bang, or even a pop; compromising on the popcorn’s price far too early, like they’d given up before they started. But who can really tell what the businesses bottom lines will be?

So, to the Boardroom it was and claws were out in the girl only Graphene team, particularly given Elizabeth’s version of events was so inventive. Sugar did point out that the girls had “over ordered” the wine which he felt was a sin; they’d ordered 21 bottles apparently, more than a litre of wine per guest. Sounds like good hospitality to me, but not sweet enough for Sugar, or as it turns out, for their profit margins and the ladies were pipped to the post by just over £200.

Team Vitality were delighted with their first win of the season; although I know whose party I’d rather have been at. And then it was off to the Oval for a spot of cricket with legend Kevin Peterson and back to the Boardroom for a beating for the Graphene Girls.

Siobhan, Elizabeth and Joanne were the last three men standing and Sugar lined them up, but fired just one. Siobhan bit the dust, Joanne was given the next project manager’s job (talk about a poisoned chalice, it’s Sugar’s birthday gift next week) and Elizabeth, well, Elizabeth got off scot free, until she got back to the house, when she was confronted and called a liar; not an inaccurate description if you’d just watched the show.

Overall the level of cringe-worthy moments this week was staggering, and combined with some almost unbelievable business gaffes, we might as well have been watching Geordie Shore for the amount of insight it gave us all – and last time I watched that, some girl peed in her kitchen sink. Although to be fair to her, despite being immensely inebriated she still got the job done, was incredibly precise and performed in front of an audience, more than you can say for this week’s apprentices.