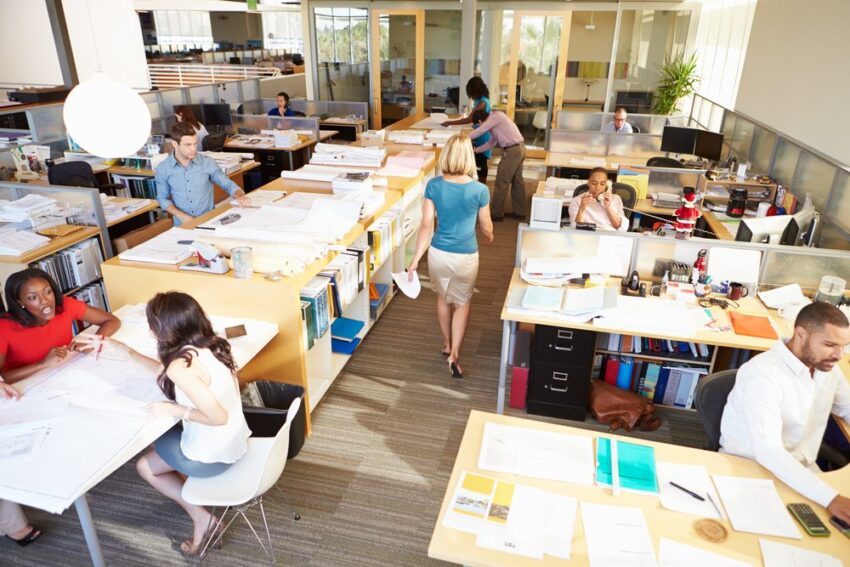 Jeremy is wrong, in my opinion. Like many who responded to him on social media, I’ve never had a dedicated office in the 27 years I’ve been going to work and I don’t feel any worse off for it.

Paxman is right, though, about the hierarchical dividing lines between offices and open space. When I started out, in the late 80s, my first proper job was in a modern office with a very precise and calculated approach to space planning. You knew your place. I was the most junior person in the office, so I had the smallest size of desk and the least amount of space.

It didn’t take me long to start wanting a bigger desk! Then some higher partitions, and eventually an upgrade in the shape of my own meeting table. The boss had a big office and his boss even had an ante-office outside his real office, where his PA sat as the outer picket maintaining his magnificent isolation.

Since then, rather than everyone acquiring an office, the opposite is the norm. To my mind this has greatly improved the working environment and isn’t all about cost-cutting or whip-cracking by senior managers. Removing offices has flattened hierarchies – apply it to an existing work space and people feel on more equal terms immediately. Bosses suddenly seem more approachable and the world seems a fairer place.

The transition from private offices to open plan sometimes arouses resistance. A former colleague once described the long and heated battle he’d waged with one of his regional managers, based in a distant office, to persuade him of the merits of moving to open plan and embrace the new ways of working. Having tried persuasion in vain, one weekend he simply had the manager’s partition walls removed completely.

Dedicated offices impede collaboration, in my view. In a conversation across a pod of desks, information is shared, feelings are understood and decisions are made in a fraction of the time that it might take communicating electronically or by phone from the isolation of an individual office.

Certainly there’s sometimes a need for privacy – a meeting over an HR matter, for example — but with a sensible number of quiet rooms, meeting rooms, kitchens, and flexible space, you soon get into the habit of finding somewhere for a conversation.

My teenage kids told me their reference point was Harvey Specter’s office (the high-powered lawyer in the Netflix legal drama, Suits) and they couldn’t understand why I wouldn’t want something similar. Harvey’s is more of an apartment than an office – a wall of vinyl records, a shelf full of signed basketballs, two sofas and a dining table. But even were I offered such opulence, my answer would still be no. I’d feel cut-off in every way from the people I work with once the glass doors were closed.

At British Gas, none of my leadership team colleagues has their own room to work from. We find that our open plan offices encourage teams and departments to talk and collaborate, which breaks down barriers. It removes the barriers between ‘managers’ and ‘employees’. People can walk straight up to the Directors’ desks and ask them a question if they want – they’re much more accessible. You feel more closely connected to the business and that you’re on the ‘inside’ of what’s going on through overhearing conversations, watching relationships, and sensing the mood. It even helps with letting natural light flow through the building, which helps energy levels and creativity.

So will we advocates of greater collaboration and the removal of hierarchy win Jeremy Paxman round to the value of open plan offices? I doubt it. But tens of thousands of British businesses need no convincing, and I can’t see them reversing the change they’ve made.

Stephen is responsible for British Gas Business (BGB), the division serving almost half a million businesses across 900,000 locations with energy supplies and energy services. Previously, Stephen was Group Managing Director for Consumer & Small Business at eircom, the leading telecommunications company in Ireland, and served on the management board of Virgin Media, leading the business division.
View all posts

Stephen is responsible for British Gas Business (BGB), the division serving almost half a million businesses across 900,000 locations with energy supplies and energy services. Previously, Stephen was Group Managing Director for Consumer & Small Business at eircom, the leading telecommunications company in Ireland, and served on the management board of Virgin Media, leading the business division.