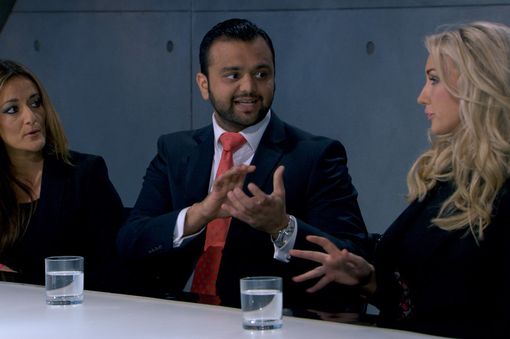 As Nick Hewer said ‘Here in the land of the sand dune, the camel, and the Burj Al Arab, size really matters’ but in sourcing a flag a fraction of the size needed Endeavor’s Project Manager (PM) in Zeeshaan demonstrated his dictatorial style and inability to listen. As I watched this unfold I thought – ‘ah it’s another failure to listen slant I need to write about’ but then my 12 year old piped up beside me ‘mom he really doesn’t like girls does he?’.

Interesting, I thought, and settled back into my chair and watched that drama unfold; but more of that later. What happened in this task of negotiation skills vs treasure hunt?

Myles offered to be PM for Evolve. He asked the team for their thoughts on the list of eight items they needed to source in ten hours at the least cost for the Waldorf Astoria Hotel in Dubai. He seemed to support them throughout the task; he listened, he offered guidance, gave further instruction and then he allowed his team members to make decisions. His failing was to wait for a flag to be made on ’dubai time’, i.e. nearly an hour after they said it would, thus losing valuable moments to go and source something else. Jordan was given a chance to show some leadership and backbone for a change, and Louisa determined an Oud was not a perfume, rather a musical instrument. Something I feel fundamental to them succeeding at the task. Oops I have given away the outcome. Actually that doesn’t matter; yes they won by approximately £90 but it was the dynamics and the issues bubbling within Endeavor that made this episode.

Zeeshaan put himself forward and bulldozed them into accepting him despite Leah’s attempt to put herself forward. He knew Dubai like the back of his hand he said, but was wearing gloves, as Lord Sugar stated, such was his absolute failure in this task. It was bravado and balderdash. His PM’ship was delivered and judged as the cockiest and least popular so far. He was overly direct and allowed a personality clash, if you can call it that, to overshadow the task at hand.

In the business world, as in the real world, personality clashes can be awkward. However in business it is about rising above that and accepting you do not have to be friends, you do not have to agree, but you absolutely must put aside those issues and move forward. Zeeshaan did not do that, and to a degree neither did Leah once the bit was between her teeth. She tried to overrule him but to her detriment backed down when it mattered and that nearly caused her downfall in the boardroom. Neil bought a modern not a traditional Kandura, and Kurt got the flag measurements completely wrong contributing to the teams loss. But did Zeeshaan take them into the board room? No he took the only two women on the team. Natalie for ‘doing nothing’ and Leah for ‘doing something’ just not the something he wanted, or was it as the ladies suggested just because they were the women. It appeared to all watching that the errors lay with the boys.

Allegations of having a problem with women, being unable to cope with women challenging him, being rude to women, never saying please or thank you to them and being chauvinistic were leveled at Zeeshaan in the boardroom, and I would have to say he didn’t defend himself. Instead he remained adamant he had brought them for the right reasons and in his smugness appeared patronising. In the end Lord Sugar drew it to a close stating Zeeshaan’s mouth outran his abilities – what a fabulous turn of phrase, and one I will be pinching for a blog I’m sure, and fired him.

As Karen Brady said ‘Saying it and doing it I’ve found in business are two very different things’. Maybe Zeeshaan, will consider that in his departure whilst Natalie and Leah put it into action next time?

So the lessons this week – mathematics (again) is critical; when you need to buy a flag of a certain size, make sure you pay attention to get it the right size, listening skills; actually listen and don’t talk over them and brow beat them, and finally when you take someone into the board room make sure it’s for the right reasons or it may back fire on you, as it did with Zeeshaan.