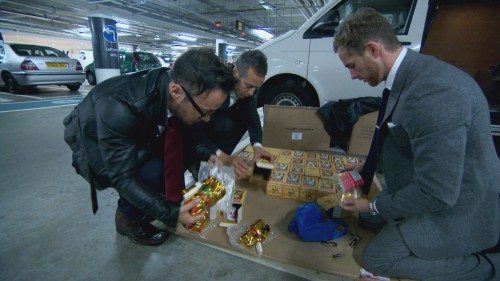 So what’s the task? Was anyone clear? To shift a container load of goods… surely there’s more? Luckily for this year’s hopefuls this task is as straightforward as they come. Essentially they had a multitude of tat to sell including lucky cats, cat litter, leather jackets and bubble wrap.

The boys got off to a good start. Realising that few places are open to business at 4am, they headed straight to a casino in the hope of shifting the lucky cats. The girls, meanwhile, chose to wait in Chinatown in the hope that Londoners love a Chinese takeaway for breakfast.

One suspects with reality shows, that the longer the series runs, the bigger the character of the selected participants become, and last nights episode, certainly didn’t disappoint, some big character falls are on the way! One by one, out the egos were rolled.

Jaz Ampaw-Farr likened herself to a machine that can process information faster than anyone else. Zee looking like he didn’t need 250 grand likened his business acumen to Napoleon’s, one hopes he can evade his Waterloo then and not be exiled on a South Atlantic Island! Luisa believes she has the sex appeal of Jessica rabbit but with Einstein’s brain! Big bold statements we just know will unravel just as the ego’s surely do over the coming weeks. Talent shows are made all the more enjoyable when witnessing the contestants wallow in self deluded belief before the inevitable character assassination and sacking by his Lordship. And we love to see it. But its the twists and turns of this format that make it that you can never be sure who’s for the chop and when.

Lord Sugar says in a recent interview that he believes there is no hunger anymore, no desire for people to rise above the chaff, and yet we see hunger and desire here in this first episode, so is he still trying coach this disaffected nation off our sofas?

In first episode then we see the two teams of wannabees wandering around london, trying to sell barrow boy tat from the contents of shipping containers, easy we cry at our TV sets. The boys endeavoring to off load their tat win triumphantly by a huge £58 margin, Lord Sugar rewards them with a slap up feed courtesy of Fortnums and Masons, the fate of the girls bodes not so well. The shaky, badly received and cringeworthy motivational ladies team leader Jaz Ampaw-Farr, the lady who is half machine, perhaps seals her own fate by refusing to take on board her teams suggestions. She does herself absolutely no favors in front of the Lord, the outcome is inevitable the finger is raised and fired she is, the correct decision made. Not a bad start one down, but as I can’t help feel I wouldn’t employ as single one of them in my business, I’d be happy firing the lot at this stage, lets hope the worthy candidates emerge.