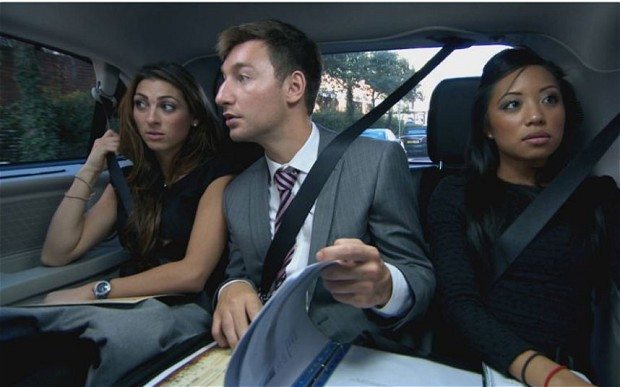 They were tasked with creating and selling a brand new flavoured beer. Tim Stillwell was appointed project manager (PM) for the girls team Evolve, as his business plan idea involved drinks, and Kurt Wilson PM for Endeavor for the same reason. What followed was an interesting mix of convincing sales techniques, incomprehensible location decisions, curious team task allocations and poor basic mathematics.

I chortled when Kurt selected the sub team to make their chocolate and orange flavoured beer. He selected one person who didn’t drink beer, another who didn’t like beer and one who couldn’t drink it for religious reasons!? Not the best selection maybe? And in the real world this could have left him open to religious belief discrimination and harassment claims! Then to add insult to injury he then made the tasting decision for them when he wasn’t even there. ‘I had to make a decision and it’s done’ came his rude response down the phone to the production sub group’s question as to why an amber base had been selected not the stout they were preferring.

Evolve seemed to get their groups together quicker and cleaner. The production team tasting was great and decisions made easily. The rhubarb and caramel beer however was sadly spoilt when they struggled with calculations, dilutions and ratios to transfer the taste test to production, wasting a significant quantity of beer in the process. Tim stated ‘sales are our forte not maths’ but this showed just how important basic school mathematics classes really are; those two facts are not mutually exclusive in my opinion. Francesca stated she only had GCSE maths, but Richard Branson left school at 15, as did Michelle Mone and they manage just fine. It was a poor excuse. School mathematics is much maligned but this shows how important it should be.

Location choices were interesting with a quiet beer festival, a two hour dash to a busier festival, or much like last week’s selling of the cats in China Town debacle, Evolve’s fatal error of trying to sell beer in a ‘wine’ bar; clue’s in the name right?

The selling techniques to the trade though were much more effective with Rebecca and Leah presenting clear and convincing pitches. Sadly Endeavor couldn’t say the same with the inexperienced Jason jumping in and undermining the pitch in play. This was further hampered when the boys turned up without with a single sample for potential buyers to taste. Also, call me old fashioned but, I’m not sure calling your colleague a ‘dosey pleb’, or a ‘silly shit’, is totally appropriate either but it makes great viewing!

So the outcome? Despite their best efforts to the contrary the boys won. Sad I thought as the girls’ (+ Tim) efforts seemed truer to the task. Clearly the location and the mathematics had failed them. The expected cat fight in the board room, from both the boys and the girls, led Lord Sugar to accuse them of failing to organise a ‘piss up in a brewery’ and to damn Kurt for using Zeeshaan as a taster as he was ‘ drier than a cream cracker in the Sahara desert’ – great quotes thank you Lord Sugar.

After further discord, and almost tears from Rebecca Tim was fired showing that whilst location, location, location was just as important as mathematics it was the business basics that were once more missing. As Lord Sugar said, if they couldn’t sort the basics out in week two so help them, and he suggested they got their acts together.

Last night showed there are glimmers of potential from the candidates now and I am keen to see how these develop, to see who actually deserves the 50:50 investment opportunity with Lord Sugar. Yes it’s a tv show, yes it is fabulous entertainment but let us not lose sight of the fact it is real life, for them at least, as there is £250,000 investment money at stake and these people are potentially business decision makers of our future.

One thing is for sure though, love them or hate them I suspect more will now watch the show having read the hype and seen the feedback after these two shows, and we will all have an opinion on it, thankfully not all the same – to pinch a French expression ‘vive la difference’.

So great viewing once more for me, what did you think?