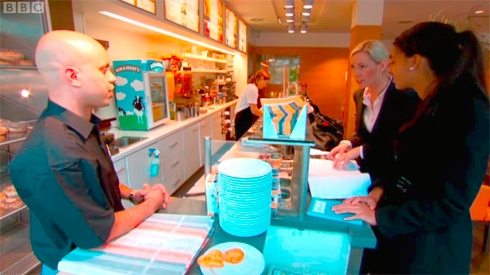 It was a nervous week for me as two of my top four tips were made project managers. For team Apollo it was Stella. For team Synergy it was Chris. Both candidates have received praise and criticism from Lord Sugar in the past, so this was a real test for two potential winners to really shine.
After a few rough weeks, I think Chris had no choice but to nominate himself as team leader. It was his chance to prove that the slip ups hadn’t been down to him and when it came to the crunch he could get results. After three consecutive weeks on the losing team he desperately needed a win.
I think team Apollo did really well. They wanted to stick to the British flavors and went forward with Aberdeen Angus and Beef-Chilli.
Joanna, Laura and Stuart haven’t always been the best team players, so Stella had a tough job to keep them in line. I think she handled them well, whilst not bringing too much attention to herself. She was efficient, effective and a strong leader in taking the appointments (and closing them).
After an early series wobble, Joanna is really starting to prove herself in sales. The idea of giving medals to kids last week in the video task was genius and I think she proved again last night that she has the sales patter. Although she did a great job, I did think she came across as a little insulting at times especially when she was trying to explain where she is from: “We come from the UNI-TED KING-DOM, E-NG-LAND”. It was funny stuff but you don’t irritate anyone you are trying to sell to.
Again, Laura is still thinking about herself and not the team. Her constant moaning really gets on my nerves. I’d find it very difficult to work with someone like that. You need team players who are positive, motivated and energized – not whining all the time. She never points the finger at herself and always blames the team leader or a teammate for their failures.
Team Synergy started off well with their two flavors of Goulash and Currywurst. In my opinion they were well coordinated, but made an initial error. They had secured an appointment with a massive hotel chain in Marriot. When the appointment was moved from 9am to 1pm that was a disaster, an absolute shocker!  They needed to remember that timing is everything and when you have a huge opportunity for a very big order ahead, grab it and seal the deal as fast as possible.
In the end Apollo won the task with a significant £2000 difference. In my opinion Synergy lost because of wrong timing, they didn’t prioritize and the Marriot error was a massive, massive mistake.
When it came to the boardroom, if Christopher had fought harder, he could have kicked Jamie out. Jamie had a close escape due to his previous successful performances and definitely needs to step up next week. Chris really could have gone but I’m glad he didn’t.
Next week I want to see Jamie and Laura as project managers – Chris also needs a big result next week.
Lee’s Raw Talent Academy aims to provide SMEs and corporate organisations with the vehicle to build internal sales academies into long term staffing plans and to encourage organisations to look at the wider raw talent we have in the UK and not just graduates. Lee, who has over ten years experience working in recruitment and over seven years as an employer of sales people, is passionate about giving job seekers an opportunity to earn a career – and Raw Talent Academy aims to give the unemployed community that chance.