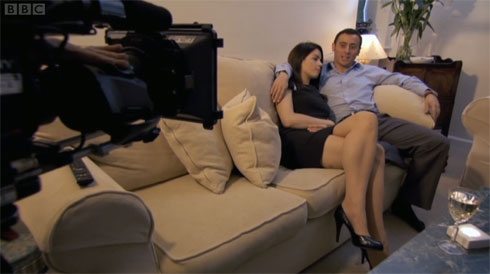 From the outside last night’s task may appear to have been a bit of a disaster for both teams. What you have to remember is the teams only had two days to put together a new product, two adverts and a pitch – I know from experience that isn’t easy!
After last week’s performance Alex cemented himself as a complete liability.  Having worked in the Trafford Centre in a previous job he should have known where to pitch his promotional stall. He talked the talk and didn’t deliver. In fact, he did the exact opposite by completely ballsing up the location.  For me, his head was always going to be on the chopping block this week. As team leader this was his chance to prove that he was more than just talk and not there just for the ride.
In team Synergy it was good to see Christopher step up to the plate. He has been quiet but effective in the tasks to date. I was interested to see how he would perform leading the team.
Overall, the heart of the task was product placement. I think the teams forgot that last night. They were so concerned with trying to impress the advertising guys that they both forgot the real pitch was to Lord Sugar. Ultimately it was him they needed to impress and it was him they were effectively pitching too.
For team Apollo, I thought the ‘germinator ‘name was actually pretty good.  What really let them down was their branding and packaging – Red and Black! What was that all about?!  To me the product looked more like something to kill cockroaches with rather than a kitchen cleaner!
For team Synergy it was the octopus. I have to admit, I didn’t get it. The Octopus idea reminded me more of a bathroom product.  Having said that,  this was something the focus group mentioned and  I think it’s really important to pay attention to that – after all what’s the point in doing research if you’re not going to use it?
At the same time, the focus group for team Apollo said that the germinator sounded too in your face and brash for them.
For me the reason why synergy won was because they listened to what the focus group had to say and used it, whereas Apollo didn’t.
As a self confessed advertising and marketing guru Alex has really struggled throughout the tasks; in an area that should have been his own. I’d say the same for Laura too.  When it came to the board room it was Laura and not Sandeesh that should have been pulled in.
Chris was mismanaged last night and I still tip him to be in the final four along with Liz, Stella and Jamie. His idea wasn’t great and the use of a child in an advert for a product not safe for children was a massive error.  He stuffed up last night but he should have been reigned in by his project manager.
For me Laura should have been fired yesterday. I was gutted she wasn’t in the boardroom. She’s a real wingebag and didn’t bring anything of substance to the table in last night’s task.  Alex really shot himself in the foot by bringing in Sandeesh.  Having said that, if I Laura had been brought in, if I was in Lord Sugar’s shoes it would have been a double eviction for me last night – with both Alex and Laura getting fired. He’s a nice guy but when you scratch the surface, there’s no substance there.
Next week I want to see Stuart ‘the Brand’Baggs step up to be project manager. He’s shied away in recent weeks and needs to raise his game.
Lee’s Raw Talent Academy aims to provide SMEs and corporate organisations with the vehicle to build internal sales academies into long term staffing plans and to encourage organisations to look at the wider raw talent we have in the UK and not just graduates. Lee, who has over ten years experience working in recruitment and over seven years as an employer of sales people, is passionate about giving job seekers an opportunity to earn a career – and Raw Talent Academy aims to give the unemployed community that chance.