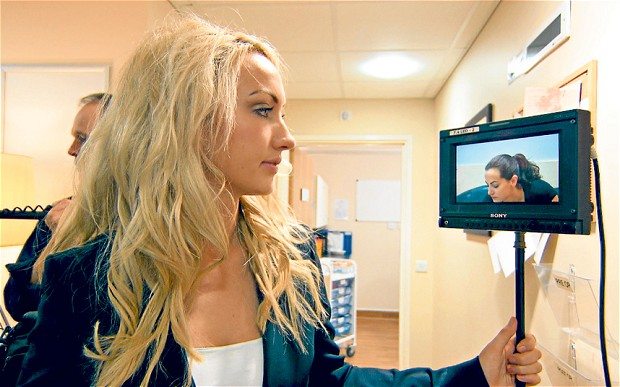 Why? Because finally this series is over and I no longer feel able to watch for Business Matters and give opinion on their professional capabilities. I have exhausted my comments on their inability to listen, their failure to engage, their shocking maths skills and their utter belief in their abilities, be those founded or not.

So my last opinion piece on this matter way be somewhat sexiest, a smidge inappropriate, with only a dabbling of business sense but please forgive me. Here goes…

The task was to create their brand, with a website and a full campaign including a promotional video (oh no not another Herbert!?) to convince Lord Sugar they were the girl for him.

He said Luisa needed to be clearer and Leah had to convince him in an alien environment.

They could pick their team and Leah’s direct approach bagged her Francesca, Uzma, Alex and Myles – bang bang bang she went firing through the phone calls, leaving Luisa with Neil, who she spent too long chatting with which lost her other choices and left her with Jason (how ironic given past episodes), Zee and Natalie.

What followed was pinky fluffiness, caricatures, sugary words, tears and agreeable manners, and shock horror that was from Luisa! She appeared to have finally listened and learnt through these 12 weeks that people work smoother, and tasks go better, when approached in a certain manner and that she would get further that way. Hallelujah, finally some good came of these painful business process weeks and Bakers Toolkit is born, with her evolution complete.

In sharp contrast Leah was snippy, over direct, borderline rude and self-obsessed. Even when she was told her clinics name of NIKS (SKIN backwards) conjured up inappropriate images (nicks/cuts/slashes), and Lord Sugar said she should have called it Doctor Leah she didn’t waiver. The quiet non-business woman (worm) turned this week, and by heck it paid off. Mind you she’s had a change of heart about the name – after she has her mitts on Lord Sugar’s £000’s! Good Girl. Already ‘listening’.

Leah’s direct focus, total commitment to her plan, and drive to succeed, really showed. Yes Luisa was as committed but at the end, as Nick Hewer said when you fail to plan your pitch you plan to fail. Luisa planned by icing her cakes, where Leah drilled hers again, and again and again.

Highlights of the pitch itself – Francesca’s ribbon dance, Luisa stumbling over her words, Leah’s frozen smile, and tears from Luisa; pure television gold.

How did it end? A strong brand, but a wrong brand for wholesale, a personable style and refined thinking for Luisa verses a weaker brand but a strong style and a stronger lucrative proposition. Luisa’s worse case is to make people fat, it is much less risk and more akin to what Lord Sugar has done before. Leah’s extreme is to scar them for life, it is high risk and something never ventured into previously by him. Quite a choice for Lord Sugar eh!?

In the end I feel it boiled down to whether Lord Sugar would get 100% of his investments attention and he didn’t feel Luisa would give that as she still had three others businesses to support. ‘It’s the devil in me’ he said when he agreed to take the risk and hire Leah.

So Barbie won, being an expert in her field and her professionalism won us over. Bratz in contrast, whilst ‘lost’, actually gained respect, I believe, from the viewers, she showed she could change and adapt, although is still way too sugary and twee for me.
And so ends this year’s #TheApprentice #Phew

I am glad it’s over, but please let me say I have been honoured that you have read and commented on my pieces here so I would like to invite you one final time to come share your thoughts and opinions with us about the whole series, or this final episode at @BizMattersmag or follow us on twitter @3domSolutions. Thank you and good bye 😉