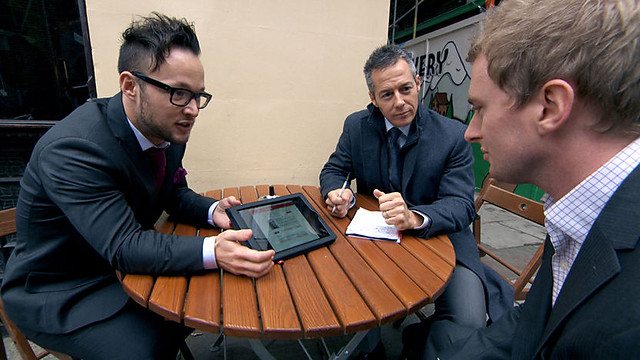 With the teams being mismatched number wise Jordan was asked to switch from Evolve and join Endeavour. With that move he also finally stuck his head above the parapet, or balcony to maintain the theatrical analogy, and volunteered as Project Manager (PM). Although I have to say Alex describing himself as the Christian Grey of the Valleys was taking the literary references a step too far!

Endeavour decided to go for a young professional target; why? because they could relate to it. It is concerning that they choice this group for those reasons as it severely limits their potential markets. But anyway they chose it, and still managed to get it wrong; the name of ‘CuffLinks’ being just the starter of erroneous things to come.

Evolve had it all to play for after yet another win last week. Jason stepped up to the PM plate as he had run a dating website at university and was known as Cupid. They selected the silver haired market of the over 50s – they wanted elegant, classic and yet cheeky and fun but after some market research they seemed to ditch that in favour of ‘Friendship and Flowers’ a more boring, staid and almost funeral like approach. I’m sure they all have (or had) parents, why didn’t they consider what their parents would have wanted?

Sadly Jason never stood a chance with Louisa as his side kick, she nipped at his heels with most appalling manners (to steal Nick’s description in the boardroom), chastised him like an old married couple, bullied and undermined his ability and confidence to such a degree Jason was forced to abdicate as PM; a first in the history of the Apprentice. Jason was ever magnanimous and gracious – described it as a courageous action to ensure team cohesion, and accepted defeat in the jaws of Louisa’s constant nagging. Neil was clever though and did take charge of the resignation process and thus dissolved himself of responsibility or decision requirements as a result. Crafty.

So the end results? Endevour’s pitch was led by Smiley Mylely – his 1000 watt smile was turned to full strength with his professional delivery. Sadly though the ‘corporate’ looking website did not connect with the fun advert staring Alex’s eyebrows (they really ought to get a show of their own after this series). There was no cohesion, and their character in the advert of ‘Herbert’ failed to make an entry on the website. They had the right market but failed to deploy their ideas fully.

Louisa appointed herself to present the marketing plan for Evolve, and managed to deliver her pitch with a cutsie ‘hello everyone’ whilst waving her hands as she entered, in a twee voice and whilst rolling on the balls of her feet. Presentation skills Nil. The feedback was that the concept was too safe, positioned for the over 80s not over the 50s, and too bland.
Whilst Endeavour failed as much as Evolve in this task, with Jason delegating his heart out and not actually delivering anything himself, they were given the benefit of the doubt by Lord Sugar and sent on their way, leaving joint PMs Louisa and Jason to argue whether Francesca or Neil should be brought back into the board room. Francesca lost.

I would have to say though that even in defeat Jason remained a true gentleman. He did not take the opportunity to attack Louisa and her style, instead criticised her most elegantly, and when questioned by Lord Sugar held his own and turned the attack into a great defence. It was the nicest firing think I have ever seen ‘Jason you are a nice fella, and it’s with regret that you are fired’ came the call. I admit now I was praying for another double eviction – Louisa is truly dreadful and needs to go, but sadly Lord Sugar did not oblige. Maybe with Karen Brady requesting to follow Louisa next week she will be finally rumbled and gone? Here’s hoping.

I think the one’s to watch remain Neil who was mostly honourable in his approach this week; even supporting Jason in confirming Louisa’s bullying when he could have so easy just turned the knife, as many of the others would have, and Myles, quietly calm, if a little over smiley. Alex needs to address whatever issue it is that the others just cannot get over and trust him and Leah needs to speak out and louder; she said the website was too masculine and boring but they didn’t hear or listen. So next week it’s creating a ready meal – let’s see how much of dog’s dinner they can make of that!

So I ask you again who are you watching and as we near the end who do you want to win the £250,000 investment? Come share your thoughts and opinions with us at @BizMattersmag or follow us on twitter @3domSolutions