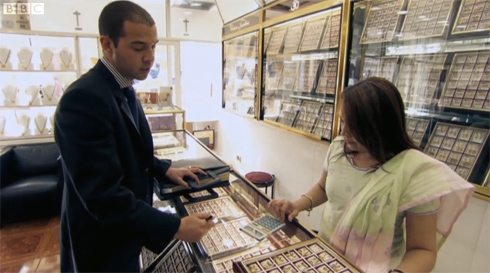 This time the task was back in London – the candidates had to buy ten items for the lowest price possible. A simple task which was all about the wheeling and dealing.
Lord Sugar took the teams back to boys versus girls, with two of my top tips taking the lead as Project Managers – Jamie heading up team Synergy and Liz taking the lead for team Apollo.
As the task kicked off, team Apollo spent their time on the phones – planning ahead to make sure they could get every item on the list, while team Synergy wasted no time getting out into the streets to search for their items: a really risky “hit and hope” strategy. I think the real difference between the teams, and where the task was won or lost, was in their focus: the girls decided to focus on getting every item and avoiding the penalties, while the boys focused on the bartering.
Advised by project leader Jamie, to “have a story”, Chris and Stuart were like a comedy duo, making up tales about needing a tartan to take their Gran to a wedding and leaving their brother’s books in Nottingham – classic, absolutely hilarious! The shocking part is that their lies worked, and they managed to blag some amazing discounts through their sob stories.
Jamie was out on his own and really outdid himself with the haggling this week. Managing to snare a solid gold Tikka (an Indian headdress apparently!) down from £180 to £135 and bagging the sewing machine for nearly half the price the girls paid. He only managed two items out of the five on his list though which could land him in real trouble if they ended up losing the task.
In the girl’s team Joanna is really starting to show some skills, despite a weak start to the series. On the phones she quickly managed to figure out what a Bluebook is (a book of streets in London for Taxi drivers) and wasted no time in tracking one down for a bargain £50. The boys meanwhile spent hours looking around for an old edition of an American military magazine – what muppets!
While Joanna did really well this week, the rest of the girls were abysmal negotiators. Aiming for random prices  and asking for only £3 off, it seemed the girl’s couldn’t really be bothered trying to barter the prices down and were more concerned with getting one item and moving on to the next. Stella in particular was too concerned about coming across as rude and seemed to be looking for items in all the wrong places. I think looking for truffles in Knightsbridge was responsible for team Apollo losing the task. Stella should have listened to Laura when she warned that it was wasting time.
Laura also came up with the huge figure of £200 as a starting price – this was just shocking – hasn’t she ever heard of starting low?
So, when it came down to it, the girls managed to get all ten items, while the boys only managed to get seven of the ten. Even with some huge fines for the items they missed, the boys still managed to get the items for a lower price than the girls, winning the task and getting to enjoy a nice trip to Paris. With only £70 between the teams, it was once again really close, and a little more effort to negotiate the prices down could have sealed the win for team Apollo.
Project Manager Liz decided to bring Laura and Stella back into the boardroom with her and the cattiness really came out. Finally, Lord Sugar decided to fire Laura, and in my opinion he made the right choice. Laura never seemed to have her team’s best interests at heart and wasn’t a good team player.
With her dismal failure in the beach task in Week Two I’m surprised she’s lasted this long – all she seemed to be good at was bitching. Stella had a very close call and really needs to step up her game next week.
Stella and Liz seemed to take the backbiting back into the house with them and it will be really interesting to see how the tensions affect the task next week.
Lee’s Raw Talent Academy aims to provide SMEs and corporate organisations with the vehicle to build internal sales academies into long term staffing plans and to encourage organisations to look at the wider raw talent we have in the UK and not just graduates. Lee, who has over ten years experience working in recruitment and over seven years as an employer of sales people, is passionate about giving job seekers an opportunity to earn a career – and Raw Talent Academy aims to give the unemployed community that chance.