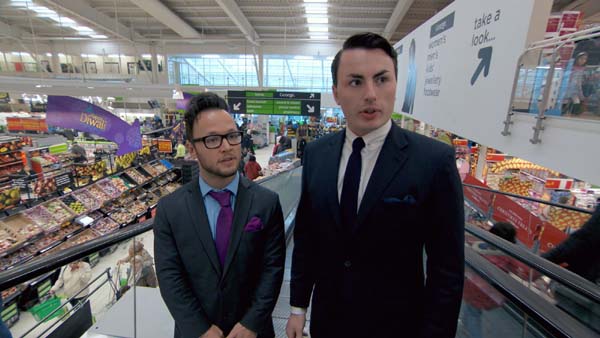 The teams were tasked with coming up with an original idea for a ready meal and the one who sold the most orders to Asda, Ocado and Morrison’s would win. Alex was put in charge of Endeavour by Lord Sugar and after a small wrangle between Francesca and Neil, Neil took the reins for Evolve. Interestingly Luisa took herself out of that battle; maybe weary from the previous week’s take over skirmish. Mind you she also took herself out of the kitchen, but more of that shortly.

Endeavour started with Alex offering meal suggestions, whilst the rest of the team tried to bring him to heel with market concepts, target audiences and food styles. Alex instead continued to run away with ideas, again demonstrating his naivety and inexperience in a business world. He told Myles he was going with his geographical idea of ‘foods from around the world’ but when challenged by Myles did a U-turn and went with the Dangerous Dinners, healthy horrible food. Why? Because Myles was a father and he wasn’t. Hardly the greatest reason. He and Myles went into product design and delivered dark scary packet covered in skulls more in tune with either Halloween or in a cleaning cupboard at work on the poisons shelf marked toxic. Yes the kids loved it in the market taste tests but the parents were very clear in their dislike.

So how did Evolve fair? They went with a fusion theme aimed at students with funky packaging. The food was to be powerful and exciting so they sent the one person in the team, who told them she didn’t cook, only heated ready meals, had no taste ability, and ran an entertainments business to do it instead of the person who knew food. Poor Francesca. Luisa made it clear at the start she didn’t think the kitchen ‘sexy’ enough for her skills, despite owning a food business. She gave Francesca over the phone a clear list of ingredients with precise quantities to be used, half of which Francesca didn’t know what they were; hardly the act of someone who couldn’t cook savoury foods as Luisa claimed. It was clear Luisa had the knowledge but abdicated it leaving Francesca to flounder. ‘Can you burn chicken’ came Francesca’s plea.

Karen Brady thought Luisa had stopped playing games and may emerge as a savvy business woman now, but sending Francesca in to fail was a play if ever I have seen one. The result was a meal Francesca hadn’t tasted and was bland, bland and dull according to the student taste test feedback.

Luckily Neil managed to turn that on its side and convince the buyers they would improve the flavour before full production, despite his equally bland and dull pitch. Smiley Mylely, Leah and Jordan all took a turn to pitch to the various buyers with varying degrees of success. Myles battled on through Alex’s eyebrows and noisy cooking skills distracting the buyers, and Leah was constantly interrupted by her team. Maybe that’s where they made their second mistake? Jordan’s pitch was great –should he have done them all?

In the end it was Evolve’s Jamaican chicken with Thai noodles fusion and the promise of more flavour that won them the task. Francesca was visibly relived given her fellow team mates had tee’d her up to go. Neil told Lord Sugar he had sent her ‘to do the tasting so that they had a good tasting product’ – not sure he could have gotten another ‘tasting’ in there but I’m sure he would have tried. Even Luisa gave a last ditch attack that she had given Francesca as much flavour indication as she could down the phone – well maybe you should have been in the kitchen then eh!? Was she scared or felt safer with Neil to support her? I’m still not sure why she didn’t cook?

So into the board room went Alex, his eyebrows, Leah and Myles. Myles was magnanimous in accepting his part in the defeat. He acknowledged he was partly responsible for the packaging, as was Alex and shared he felt he had had to manage Alex through out the day, and I think he probably did. Someone had to focus Alex after all, and stop him running about making snap decisions with his ‘grasshopper brain’. Leah nearly talked her way out of the door but in the end shut up after ‘dad’ Myles intervened and told her to take heed of Lord Sugar telling her to be quiet, and Alex and his eyebrows were bid a fond farewell. Those brows will be missed, although Alex himself won’t be in this household.

The final few remain. Let battle commence. As Myles said they will be judged now on character, and business plans not just on the task at hand. Bring it on.

I’m still voting for Neil as the best of an *interesting bunch (*bad!). As we near the end do you agree that Neil’s the man to win the £250,000 investment, or is Luisa the woman for you? Come share your thoughts and opinions with us at @BizMattersmag or follow us on twitter @3domSolutions