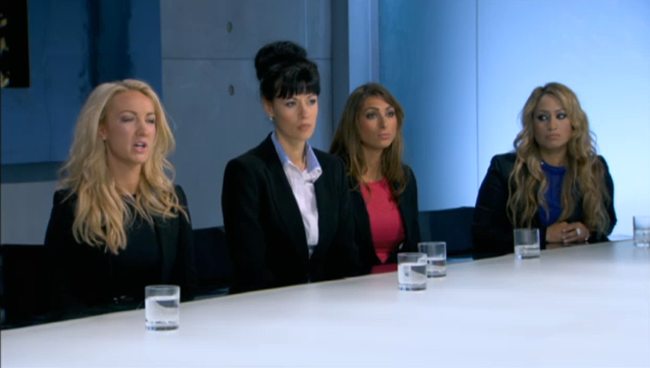 I thought to myself ‘what an interesting bunch of candidates’ as I did some research before the episode last night. I can see why there was all the hype about how they looked with their shiny hair, perfectly made faces and waxed eyebrows – and that was just the men! My, didn’t they all scrub up well in their bio shots on the BBC website! But as Nick Hewer apparently said it would be dull if they weren’t colourful, attractive characters – my words, paraphrasing his.

So I was thrilled having watched it to see the usual self-proclaimed, self-obsessed, arrogant, opinionated back stabbers were back on our screen! From the get go they were off. From the boys talking over each other and Neil taking over everything he could, to Jaz patronising her team and talking to them as though they were inferior children. Fabulous I thought. Let’s go…

As Lord Sugar said in introductions ‘actions speak louder than words’ and actions are what they would be judged on. It’s just a shame that once again this series has started with the business actions being sadly lacking and the looks and words being the total focus.

There were the boys talking over each other and not listening, the girls not communicating at all, erratic head movements from Tim and Alex’s eyebrows vying for a show all of their own!

Best bits so far? Leaving Zeeshaan hanging with a crushed ego when he called ‘high five’ after a sale and Neil replying ‘Really?’ Brilliant! Or the girls lucky cat wave in the back of the car? Frightening these people are apparently the future entrepreneurs? Or what about Tim’s SUMO moment when they had been told they had won the task, when he tried to tell Lord Sugar he would change. NO Tim Shut Up, Move On. Dear me.

Worst bits so far? The lack of basic business skills. I feel great incredulity that so many allegedly intelligent, business savvy people can monumentally miss the business basics needed. How on earth were they selected? I would expect them to have at least the following understanding to be successful in business but as the examples show they didn’t even have these abilities

• Ensure you are speaking to the decision maker – not the chap who loves leather
• Listen to people – especially when it comes to names. Neil is called ‘Neil’ Alex, not Liam.
• Find a need – try not ignoring the half Chinese Sophie who was trying to tell them selling Cats in China town was like selling coals to Newcastle.
• First impressions count – how off-putting were Tim’s erratic head movements, how distracting Alex’s eyebrows and how odd some of the girls pouting lips? One tweeter on my time line described them all as making her flesh crawl – an extreme reaction but in sales it’s just such things that can lose a sale.

By then end of the task I did think my business partner’s husband had the right idea – he said why don’t they just turn up and offer the full contents sight unseen for £2,000? Or maybe they should have allowed a five minute view from the doors like they do on the American TV show ‘Storage Wars’. Job done, they can all go home. Mind you that wouldn’t be such great viewing though eh?

So what did you think? Has this episode gripped you sufficiently to watch the next one or frustrated the heck out of you enough to turn off?