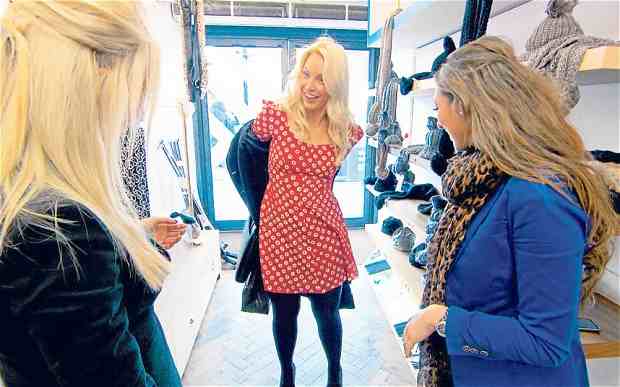 He told them they had to ‘smell what they sell’ but Endeavour must have had blocked noses given their poor performance this time.

In an interesting turn of events it was back to week one with boys verses girls. Project Managers were very quickly appointed – Myles for Endeavour and Luisa for Evolve – no surprise there given she runs a retail empire already. Nick commented that she would therefore ‘smash it’; such a fabulous phrase to hear from his lips. I did wonder at that point whether the negative press reports this past week would slay her much like they had slain Alex the previous week but they didn’t, and she lives to see another week. Oops sorry that was a spoiler and I should have warned you.

Both teams were asked to choose some goods, sell them on a market stall in Spittlefields Market and then the next day select what worked and sell that in a shop outlet instead. The one with the greatest assets would win. The girls ran at this task with great focus and commitment. Luisa I hate to have to admit controlled the task, controlled the team and stuck to her marketing plan of high volume, low cost goods of hats, scarfs, leggings and latterly dresses.

The boys however selected home-ware goods – and pretty awful ones at that! A ceramic glove that I have yet to establish its actual use, a ceramic note pad (what’s wrong with paper or dry markers?) and candles that took Jordan from 9am to 1pm to choose and deliver on a one day task! Instead of considering their market (again) they selected some random products that were medium to high end ticket in terms of price and that strategy failed them.

The boys stall was laughable in its scarcity; it was unenticing and bare, in sharp contrast to the girls stall which was piled high and the girls themselves strutted about in their own products giving buyers a clear idea of what the products would look like and providing visually something that your average ‘joanne doe’ on the street could aspire to.

When transferring the goods to fixed premises the boys would have done better to have set up a boy band called ‘Casa Unique’ than a shop of that name, as one tweeter exclaimed, with Neil and Myles using their ‘assets’ to the greater good of the task like the girls. Sadly though they didn’t. The final nail in the Endeavour’s coffin was when Jordan was sent to choose a high ticket item and returned with a vase that I can only describe as ‘interesting’; had my 12 year old brought it home from his Design and Technology lesson I would have been really proud he had tried so hard!

So the upshot was that the Girls finally won a task and off they popped to a ‘pop up’ restaurant for a slap up meal. The boys instead popped into the board room. I would have to say in this series the board room discussions have become more of a sales pitch by the contestants/candidates than ever and as such it’s painful to watch them plead with Lord Sugar. Such was the emotion this week I truly thought Jordan was about to throw up on camera he was gagging and grasping his water glass so much. Mind you that was his own fault – he really should have shut up, and moved on (or SUMO as @TheSUMOGuy calls it). He very nearly managed to talk himself out of the contest, much like Leah had the previous week. The old adage of ‘less is more’ is one to heed in business I have learnt.

So the final five will be whittled down to two next week through my favourite part of the process – the dreaded ‘interview’ with Lord Sugar’s most trusted advisors. The ‘you are a parasite’ comment at a faceless contestant is enough to whet my whistle for next week I can tell you!

So the final five are Francesca (feisty and a fighter), Jordan (small and mighty), Leah (mostly silent but determined), Luisa (sugary and girly) and Neil (manipulative and yet persuasive). My money would be on a Neil versus Luisa final if I was a betting girl, but I suspect Jordan may be a dark horse?