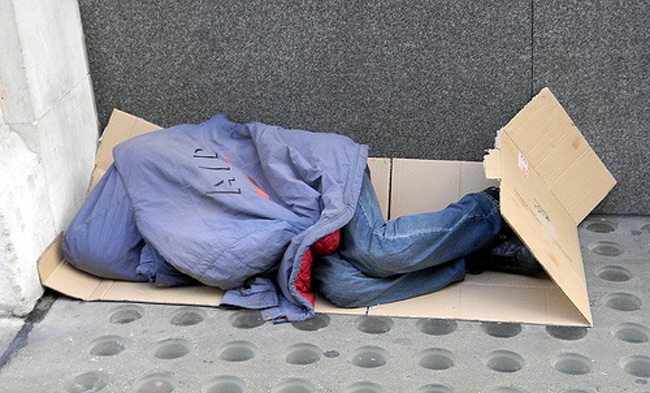 Having organised successful sleepouts in Middlesbrough and Newcastle, the event was coming to Cardiff for the first time.

It probably says something about the persuasion skills of Dan Langford, the organiser, that he secured such a speedy sign-up. “No problem. It will be fun! How hard can a night be?” I breezily replied before he’d even finished his pitch.

My last camping experience involved an unexpected heavy rainstorm, a tantrum and decamping to the nearest available hotel, an hour’s drive away.

My last festival experience was in a swanky camper van (where I invested in a magic mobile charging device for my phone) so it could hardly be called roughing it. I panic if I don’t have access to straighteners, and get taxis if it’s even spitting with rain (as my nan would say). All of these facts should give you a clue about my relationship with the great outdoors.

To quote under-rated 90s grunge band The Lemonheads, “I lied about being the outdoor type”.

But when Dan explained that every penny raised by CEO Sleepout would be going to three local charities involved in addressing the causes of homelessness and supporting people faced with severe hardship, I was sold.

Llamau, ServiceLeavers and Cardiff FoodBank are all charities who work supporting the hungry, the homeless and, in plain terms, those with nowhere else to turn. As the age of austerity lurches onwards, coldly condemning thousands of people to society’s margins, these charities fill bellies. They give hope to people abandoned by the state. They save lives.

Now, I’ve never been one for running marathons or climbing mountains to raise money for charity (a combination of lack of time and inclination) but I just knew I had to do this. It was my chance, as a business person, to do a bit more than buy the Big Issue now and again.

I had three months to raise money for my efforts, and I was able to put my own persuasion skills into action to pester friends, family, clients and suppliers to donate to the cause. I’d discussed a target of £1000 with Dan, and despite initial worries about reaching that, the generosity of people really touched me, and my total started to creep up.

A few weeks before the sleepout I realised I had no appropriate kit for a night exposed to the elements, and this is where a lovely friend (and trekker extraordinaire) rushed to my aide with the loan of a heavyweight sleeping bag and mat (she explained the worst bit is rain and cold travelling up from the ground).

Call me an optimist but I’d been hoping that late March would mean milder weather, and less danger of rain. No such luck; the night before was scarily wet and cold. I went out in the garden in my coat at about 11pm, and couldn’t take more than five minutes. As I settled into my warm bed, I worried about how I would make it through a whole night like that.

The sleepout day arrived and, ill-prepared, I dashed to a camping store to grab a few last minute essentials (flask, bivvy bag for waterproofing the sleeping bag, headtorch). As I made my way to Cardiff Castle at 8pm, dressed in 5 layers on my top half, lugging my kit in a rucksack, I won’t lie; I was scared. But I quickly realised there were another 80 or so business people in the same boat, which made for an atmosphere of what I can only describe as nervous elation.

Do you remember your first school trip away to camp, when you realised you could stay up all night eating Nutella and crackers if you wanted? No? Just me? Well, that’s what it reminded me of.

The atmosphere was festival-like, with floodlights to light the castle grounds, music being blasted over an amplifier, and boxes of beer, pies and soup for sale. In this sense it was rather bizarre. It’s safe to say it didn’t feel like the typical experience of somebody living on the streets, but then how could you ever begin to emulate the fear, the desperation of that life?

The people behind the three charities benefitting from the sleepout addressed the audience, a real reminder of why I had agreed to take part, with one sharing his very personal experiences of sleeping rough. I found a patch for my gear, had a few beers, chatted to some fellow sleepouters, and gave an interview to BBC Radio Wales who had come down to cover the event. So far, so PR.

And then the temperature dropped a few degrees….and I can honestly tell you I’ve never felt a cold like it. My hands were shivering so much that I was incapable of opening the toggle on my sleeping bag case, and I had to ask for help. I skipped the bivvy bag as I just wanted to get into a warm cocoon, and the rain seemed to be holding off. I can’t begin to describe the cold adequately. Suffice to say I’ll never complain of being cold again.

Bear in mind I was wearing a waterproof overcoat, padded down jacket from a fancy outdoors store, gilet, fleece jumper, cotton top, tights, leggings, two pairs of socks and tracksuit bottoms, Ugg boots, woolly hat and gloves. And I felt as if I might actually FREEZE.

I thought of the amount of times I’ve walked down Queen Street in the early hours after a night out, and the beggars that pepper the shop doorways along the way. I’ve never seen one that looked properly togged-up to face a long night in the cruel, cruel cold. How do people survive? The harsh reality is that they don’t, for long. Homeless people in the UK die an average of 30 years before the general population, aged just 47. Forty seven. It’s worth stopping and considering that.

Research shows that drugs and alcohol are the biggest killers, and it’s so easy to understand why. As I climbed into my sleeping bag in the early hours of the morning, I took a little swig from my emergency hipflask of whisky, to help take the edge off the cold, and the fear of the hours ahead.

The next thing I know, I felt my nose being licked. I started awake, realising that the heavens had opened and my sleeping bag was soaked through. In the hazy blue of dawn, I checked my watch and realised I’d slept for a good few hours as it was just past 6am. Most of my co-sleepouters had clearly woken before me and had sensibly headed home for a warm shower.

One of the last three left in the castle, I hurriedly shoved my belongings into my rucksack and ran as fast as I could to find a taxi. I was confused, disoriented, shivering cold. As soon as I jumped into a cab, tears started to stream down my face. The guilt and relief of knowing I was heading for a centrally-heated house, a warm bed, a hug, a shower, a hot meal was just too much to bear.

You hear about “the homeless” a lot. We all walk past Big Issue sellers in a hurry. We’ve all heard people say they won’t donate to beggars as the money is only frittered on drugs or booze.

My response to that after just one night sleeping rough is that drinking yourself comatose is probably the only way to get through night after relentless night battling the elements, with little to protect you from nature or physical attack. Who are we to judge, or to deny people that temporary relief?

Homelessness is an uncomfortable reminder of the unequal society we still live in. And I firmly believe that many of us are only a few catastrophic life events away from having to sleep rough.

As I cried tears of exhaustion in the back of the taxi (the poor driver looked very perturbed, bless him) I thought about giving birth to my own seven-year-old son. Every single person living on the street is somebody’s son or daughter, and was once a new life, hope. I thought about him eking out an existence (you can’t even call it a life) on the streets, and pulled my coat closer around me.

I suddenly remembered talking to a Cuban on holiday there, who told me something that didn’t even register at the time; that nobody in Cuba was homeless. Wouldn’t it be something if we could say the same here in the UK?

Imagine for just a second being able to say to a tourist that here in the UK, nobody is homeless.

That really would be something, wouldn’t it?

PS I raised over £1500 for my efforts, and the overall total raised was £72,000.  I’d like to say a huge thank you to the following clients, associates and suppliers for their kind donations.