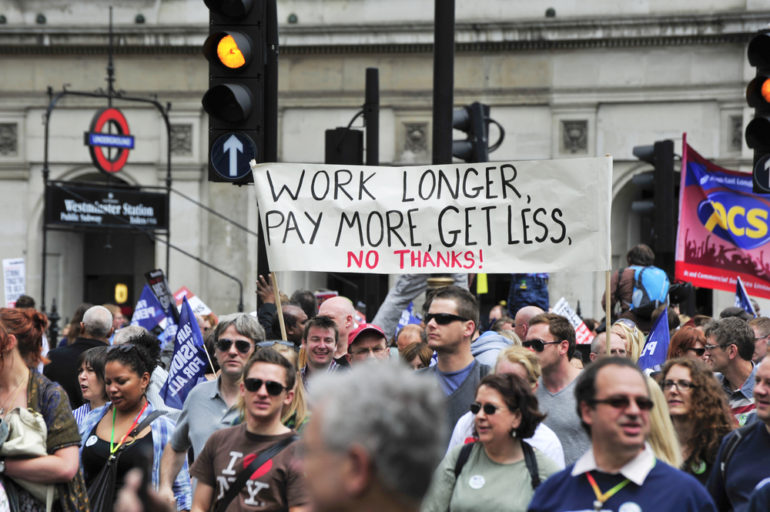 The fall of trade union membership has contributed to a massive rise in inequality, with a higher share of income going to the top 1 per cent of earners, according to a new report for the IPPR Commission on Economic Justice.

As union membership increased in the last century, there was a significant fall in inequality. However, as membership has declined since 1979, so inequality has risen to levels not seen for nearly a century. Additionally, countries that have higher rates of collective bargaining have lower levels of inequality; and within firms where there is a trade union present, pay inequality is less.

The new IPPR report is unveiled at a crucial time for trade unions as the TUC marks its 150th anniversary, while new figures show that the proportion of employees who are a member of a union has fallen to an all-time low.

Government should take action to reverse the decline in union membership and collective bargaining in order to increase wages and tackle inequality, the IPPR report says.

Through aggregating the power of working people, trade unions help them to win a fairer share of the wealth they help generate, and ensure that the wealth is shared more equally. Through doing so, trade unions can support stronger and more sustainable growth, benefiting the economy and workers.

Union membership is lowest among those who could benefit most; low-skilled, low-paid workers who lack power in the labour market – are the least likely to be members. Membership has become heavily concentrated in the public sector, just 13.5 per cent of employees in the private sector are members, and unions are almost completely absent in many low-pay industries.

With nearly 3 million union members set to retire in the next two decades, and with the movement struggling to recruit younger workers, union membership is set to decline further still.

IPPR have called for radical action to reverse the decline in collective bargaining and union membership in order to reduce inequality and boost wages.

Reacting to the report, Frances O’Grady, General Secretary of the TUC, said: “If we want to live in a more equal Britain, we have to get more people into unions – and unions into more workplaces.

“Extending collective bargaining would improve workers’ pay, conditions and voice at work. And get them get a fairer share of the wealth they create.

“If Theresa May is serious about “protecting and enhancing” workers’ rights she must allow unions the right to go into every workplace.

“Unions know we face a challenge. That’s why this week we marked our 150th anniversary by launching our new digital pilot, WorkSmart. We’re determined to bring collective organising to a new generation of young workers.”